Zimbabwe to Bernanke - You're Going to Blow It Up!

From the "you can't make this stuff up" file, Gideon Gono of the Zimbabwe reserve bank told Ben Bernanke he's, "a pathetic excuse for a banker" and "you're going to blow it all up; destroy the dollar and everyone who uses one".

In fact, Gideon Gono issued a warning on the parallels between QE3 and his policies that led to Zimbabwe's hyperinflation.  Zimbabwe experienced hyperinflation in the last decade; at the start, one Zim dollar was equal to one US $.  By 2009, they were issuing 100 trillion Zim$ notes (they can be found on eBay, where they sell for more than they were worth in Zimbabwe).  So you have to figure that if anyone knows hyperinflation, it's the guy who wrote the script for the most recent one on the planet.  As Tyler over at Zerohedge says:


Even though Ben Bernanke and Mario Draghi and all other central bankers will try to convince you that what they are doing are really different to what Gideon Gono did, you should really be taking Gideon Gono more seriously, who is basically admitting that the money printing strategy does not work to ‘stimulate’ growth. All it can stimulate are high- and hyperinflation risks. 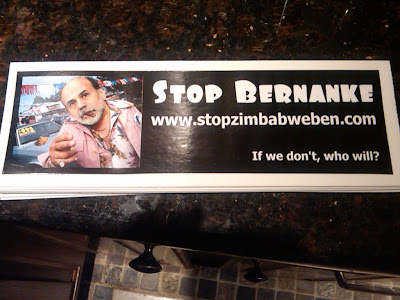