In the email box, I received a link to a story on World Net Daily, "October Surprise?  Obama Secret Iran Deal Cut" by Reza Kahlili.  That name is an alias for a man who purports to be a former US agent who infiltrated the Iranian Islamic Revolutionary Guard.  He reports:


The source, who remains anonymous for security reasons, said a three-person delegation of the Obama administration led by a woman engaged in secret negotiations with a representative of Iranian Supreme Leader Ayatollah Ali Khamenei.

The delegation urged the Iranian leader to announce a halt to enrichment, even if temporary, before the Nov. 6 election, promising removal of some sanctions.

The report includes more detail than rumors that usually get in the press: the meeting occurred October 1, in Doha, Qatar; it was led by a woman from the US, and this surprisingly detailed little tidbit.


...the woman is trusted by the Iranians, having met with Velayati more than 10 times over the past 20 years. The woman took Lufthansa Flight 419 out of Washington to Frankfurt, then to Doha, Qatar, from there

(Velayati is "Ali Akbar Velayati, the former Iranian foreign minister and current close adviser to the supreme leader on international affairs")  The little details on the flight might even allow someone to get a passenger manifest from that flight and, perhaps, determine who might have been there.

You should go read and ponder this: does it fit?  We know that the most powerful person in the White House is Valerie Jarrett, who was born in Iran to American parents, and that she has expressed attachment to the country.  She's much more than just an Iranian-influenced American, though, there are links to the Brotherhood.  We know that from well before his election in 2008, Obama himself wanted to adopt a more conciliatory position and negotiate with Iran over their nuclear ambitions instead of expressing strength. We know that in the '09 rebellion, he was weasel-mouthed at best, and refused to support kids being slaughtered by their government - kids who were adopting pro-western and pro-US positions - instead, he tried to use his amazing oratorical skills to influence the killers.

Is that enough precedent for you to think he might negotiate away a few little things, like Iran having nukes, to get re-elected? 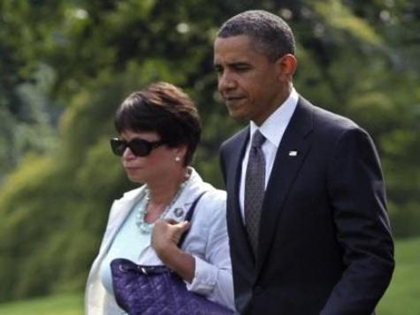