I Think We Just Had A Warning Shot

In creating money out of nothing to keep interest rates low, Bernanke has been trying to prevent interest payments on bonds from going up too high, because with the debt as large as it is, an increase in the interest the Fed.gov must pay would skyrocket and it would eventually consume the entire budget.  Well, it's going to consume the entire budget someday if we don't stop deficit spending, but the higher the interest rate, the sooner "someday" comes and the sooner everything comes crashing down. Bernanke has kept the prime rates for US customers unusually low, but the bonds are bid on in an open, international market, and with everyone able to see the money creation going on, buyers want a higher yield.

All that background out of the way, it looks like there has been an issue this week.  This is a plot of the yield on the 30 year bond, courtesy of http://www.stocktiming.com  (they change the graphic at this URL every day, but it will probably be there until Monday, 10/22/12) 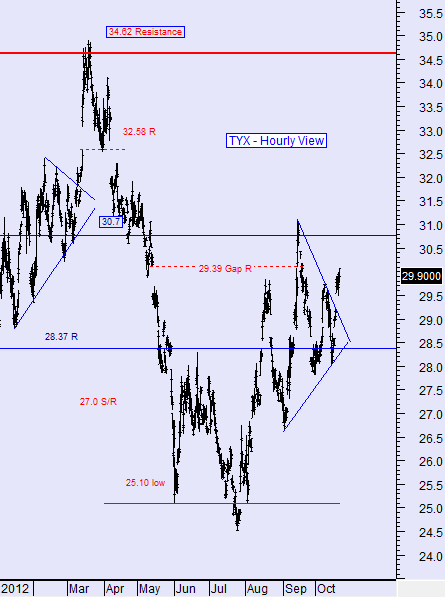 The area to concentrate on is the triangle on the right, and especially that black line above it. The main curve plotted here shows the interest rate was rising, peaked last spring, fell much lower, and after a summer of consolidation, started rising again.  For the last month, it entered into a flag, and jumped out of that flag to apparently resume its upward journey this week.

So what?  As the analyst at StockTiming says,


What was significant (this past Wednesday), was that the TYX not only moved above the resistance of its triangular formation ... it gapped above it.  When a pattern exhibits a gap above its resistance, it usually means there is a strong bias behind it.   And that means that Bernanke is in trouble now.

What happens next?  Is it time to hit the bunker?  IMO, this is a scary sign, but not a terrifying sign.  It could be that the interest rates come back down on their own, or that the Fed buys more of our bonds (more QE), so that eventually we buy all of our bonds. It could mean that Bernanke is out of options and the collapse is upon us, but I still think we'd at least have a few weeks.  It would have to get above that peak from last spring to start getting me really concerned, but I'll take odds Bernanke saw this and is keeping an eye on it.

Don't get me wrong, this will end and it doesn't end well.  It doesn't matter who wins the presidency if they don't really change things.  Unless we really re-shape the way this government spends, this is going to end in economic collapse, it's just a matter of when.   It's fashionable to say there's no difference between Romney and Obama, but you know Obama won't change spending; it's his plan.  The chances a Romney/Ryan administration would save things is small, but it's not zero.  There's zero chance Obama will.