More of the Benghazi Puzzle

Kevin, over that the Smallest Minority, has an excellent article, which, in turn, comes from TigerDroppings.com.


I heard a story today from someone inside the military that I trust entirely. The story was in reference to General Ham that Panetta referenced in the quote below.


quote:
"(The) basic principle is that you don't deploy forces into harm's way without knowing what's going on; without having some real-time information about what's taking place," Panetta told Pentagon reporters. "And as a result of not having that kind of information, the commander who was on the ground in that area, Gen. Ham, Gen. Dempsey and I felt very strongly that we could not put forces at risk in that situation."

The information I heard today was that General Ham as head of Africom received the same e-mails the White House received requesting help/support as the attack was taking place. General Ham immediately had a rapid response unit ready and communicated to the Pentagon that he had a unit ready.

General Ham then received the order to stand down. His response was to (say) screw it, he was going to help anyhow. Within 30 seconds to a minute after making the move to respond, his second in command apprehended General Ham and told him that he was now relieved of his command.

The story continues that now General Rodriguez would take General Ham's place as the head of Africon.

And that story appears in Stars and Stripes.  The net is overflowing with the story that Gen. Ham was fired for disobeying the "stand down" order and trying to mount a rescue mission. Blackfive.net is reporting that it's highly likely that an AC-130 was available to attack the forces who pinned down and eventually killed former SEALS Tyrone Woods and Glen Doherty as they tried to rescue the others themselves. The author writes:


If that SEAL was actively "painting" a target; something was on station to engage!  And the decision to stand down goes directly to POTUS!

As I posted before, the Washington Times has run an article on the apparent gun running involving our CIA, Libya, Syria, and Turkey.  This has been expanded on by Counter Jihad Report, who has been picked up by Oathkeepers.   In a piece I wrote in March of 2011, "Arm Them Today, Fight Them Tomorrow", (I can't claim clairvoyance over that) I pointed to a story in the Telegraph that quoted a Libyan "Resistance Leader" saying his fighters had been fighting us in Iraq and Afghanistan before coming over to Libya, and we were arming them.  So it certainly appears that we were running guns to Al Qaeda in Libya in '11, who is now using them in Syria to topple President Assad.  And, of course, there's the small matter of the 20,000 or so portable anti-aircraft missiles that are missing from Libya and probably in Al Qaeda's hands by now.

What's this supposed to be?  Fast and Furious - Mideast franchise?

So if the possible rescue groups were ordered to stand down, there's only one reasonable conclusion: Stevens was meant to face whatever he was facing alone.  Was he being sacrificed?  Either they planned for him to be murdered, or as someone has suggested, to be used in hostage negotiations.  The administration is apparently trying to get the Blind Sheik released as a gift to the Muslim Brotherhood (I single them out because they have been adamant about wanting him back); swapping Stevens for the Sheik would have given a cover story to the White House.  (The Blind Sheik, of course, was the one convicted of the 1993 WTC bombing).

Perhaps the plan was to get Stevens kidnapped, and either the Ansar al-Sharia guys couldn't contain themselves and killed him for fun, or perhaps Woods and Doherty, who themselves defied orders to stand down and went to rescue Stevens and Smith, messed up the operation enough that Ansar Al-Sharia couldn't execute their deal with the administration and all four of them were accidentally killed. We can only hope we find out the details, but it won't be by the election - you can take that to the bank! 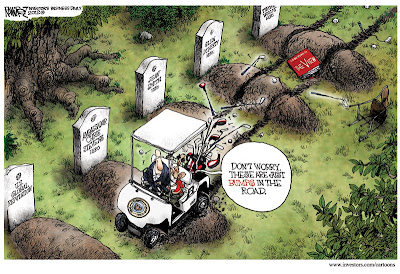 EDIT 10-28@1200 EDT  Bayou Renaissance Man offers a trail of evidence that apparently contradicts the start of this article, the reassignment/removal of Gen. Ham.  In the fog that accompanies a breaking news story, some wrong "facts" are always reported.  It's why I rarely watch breaking news stories on the TV: you know the facts are going to change.

The second part of this piece, from the reference to the Washington Times article on gun-running to my speculations on what really happened doesn't depend on the first part, and I leave this here unedited for that reason.  From your standpoint, I assume, I'm just a random Internet Idiot with a blog.  When I print things that aren't my speculation, I link to sources where I got them so that you may decide whether or not they're valid sources.