Does Wisconsin Have "Stand Your Ground"?

Because this guy really should have been armed.  Another shining example of the tolerance of the left is the way they treated Kyle Wood.


“I was getting ready for work and there was a knock at the door,” Wood emailed The Daily Caller late Wednesday. “I opened it, and a guy wrapped a ligature around my neck, slammed my head into the doorway, and smashed my face into a mirror, telling me ‘You should have kept your [f*******] mouth shut.’” “He then kidney-punched me, while at the same time saying I was ‘warned,’ and continued to beat me,” he added.  Wood said his attacker’s reference to a warning likely pointed to graffiti he found painted on his car last week. The vandalism included the phrases “house trained republican faggot,” “traitor,” and “ur like a jew 4 hitler.” Those slurs, he explained, were references to him being a gay Republican working to help Lee, a straight GOP candidate, defeat the openly gay Democrat Mark Pocan.

Put a ligature around his neck?  There's only one acceptable answer to someone with a ligature around your neck and putting your face through a mirror: double tap, plus one, because anyone worth shooting twice is worth shooting again.  (Yes, I know that, tactically, if someone has you from behind, you may need to put your first shot into their foot or knee to break free and get better aim.) 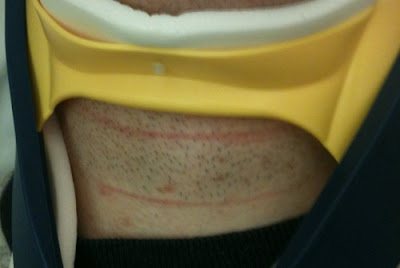 A couple days ago, GayPatriot posted that the only people who call gay Republicans "Faggots" sit on the political left.


Last night before bed, I posted a quick write-up of a meet-up I had had yesterday with Glenn Reynolds, his lovely wife Helen Smith and a gaggle of conservative bloggers and friends.  And there I, an openly gay blogger at a blog with “gay” in its very name, found the same (warm) welcome I have found at every gathering of conservative (& libertarian bloggers).
...
(NOTE: reference to Gateway Pundit - SiG) Neither Jim nor any conservative blogger, in person, in text, in e-mail or any other form of communication, has ever called me a “faggot.” In fact, the only people who seem to be directing that slur at gay conservatives sit on the political left.

It's all part of the "Identity Politics" that the left famously plays.   Star Parker famously wrote about her observations of this from the perspective of a black woman in "Uncle Sam's Plantation".  Ann Coulter writes about it in her new book, "Mugged".  It's  a petty well known phenomenon.  If a few more people trying to hurt guys like Kyle, or Sean Kedzie find themselves with sucking chest wounds, maybe we can slow down this trend.

Prayers go out to Kyle for a speedy, perfect recovery.  Consider getting a concealed carry permit and never answering a door unarmed again.