The gun show was in town again today, every 6 weeks or so, and even choosing Sunday afternoon to avoid the peak crowds, it was crowded.  As always.  I haven't been going to shows long enough to know what it was like before 2009, but starting then, the local show has been so crowded that it's hard to walk around.  Once or twice, the fire department-approved crowd size for the municipal auditorium was exceeded and they had to turn away people.

Of course, we all heard the moment of honesty when Gun Salesman of the Century (so far) Obama openly said he wanted to reinstate the Clinton-era assault weapons ban. 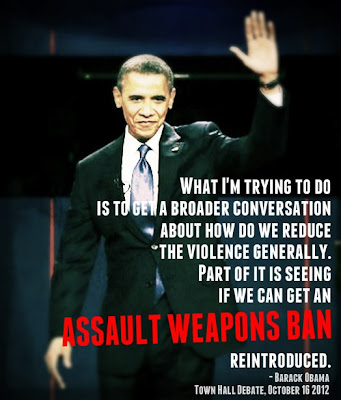 Of course, the ads write themselves.  But the Washington Examiner tells a more complete story.  (H/T to Tam)


"What I'm trying to do is to get a broader conversation about how do we reduce the violence generally. Part of it is seeing if we can get an assault weapons ban reintroduced. But part of it is also looking at other sources of the violence. Because frankly, in my hometown of Chicago, there's an awful lot of violence and they're not using AK-47s. They're using cheap handguns."

ATTENTION PLEASE!  EARTH TO OBAMA!... EARTH TO OBAMA!!  Ya see, Sweet Cheeks, the problem you need to address is not the tool.  I gar-on-tee those cheap handguns are not shooting kids by themselves.  The problem is the gang culture producing the kids that shoot other kids.  Until you address the fact that your stupid progressive policies have destroyed the culture these kids grew up in, you're going to have a problem with violence.  I know it's hard for you to say, "I'm wrah... wro.... wrr_oong" but that's pretty much the heart of the story.  You and your Homey, Tiny Dancer, there have done more to screw up your city (while enriching yourselves) than any inanimate object ever could.  Something like 99.999% of the guns in country have never shot anyone, and you're mentally masturbating in the worst way if you think that restricting honest citizens is going to affect it.  At. All.

Are you honestly so incapable of rational thought that you think this would really happen? If you are, I'm afraid there's not much we can do for you.  Maybe see an expert?