Since I don't care much about baseball, I'll stick with my forte, inciteful comments about economics.  I've presented this chart from Calculated Risk Blog (post with graph) from time to time and it's worth checking again. 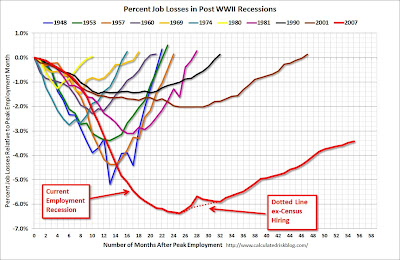 It's easy to see that the recovery to pre-recession levels is poking along, but still (rough guess by extending that curve) another 3 to 4 years away, at the current slope.  Several of us have pointed out that there are plenty of reasons that the economy was going to slow down now, anyway, and that curve may truly never return to the employment numbers we had in 2005.  As I said last time I posted this, (just in July), I see something other people don't comment on.


note the curves where they return to 0% job loss compared to the peak employment before the recession.  Note that from right to left, the longest recessions are the current one, 2001, 1990, and 1981 in chronological order.  The spoiler is that the next longest one, the recession of 1957, seemed particularly deep and long.  I find the stretching out to the right of the '81 to 2001 recessions interesting, because it appears that recessions are getting both longer and deeper.

At least, the 1990, 2001 and this 2007 recession follow the deeper trend; lasting longer holds back to the 1981 recession as well.  I suppose they separate out the 1980 and 1981 recessions because of some technical detail; I remember it as an extended period of general malaise.


If you visit here regularly, I don't have to tell you I believe this is the result of the steadily increasing involvement of the government in "fixing" things.  The more they try to fix, the longer recessions take to heal.  Didn't their moms ever tell them, "stop picking at it, or it will never get better"?  Same basic idea.