But getting back to reality, the Intellicast Radar currently looks like this: 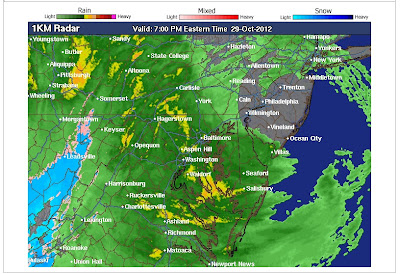 That crisp circular feature around the Trenton and Philadelphia area is an artifact of blending several radar sources into one image.

See that light blue?  Yeah, that's snow - and the pink rim is icing along the edges.  The storm is causing a blizzard in the Appalachians of Virginia.

New York is going dark, the storm surge is over the streets of Manhattan, and the nightmare is just beginning.  NYC is a place where the majority doesn't keep food in their apartment, partly because it never occurred to them that there might not be a restaurant when they need one, and partly because the average apartment is about the size of two matchboxes and costs an astronomical rent.

I always joke "inside of three days, they'll be eating each other", but I'm thinking it's not a joke this time.  Being Mayor Bloomy's gun free paradise, only the police and the criminals have guns, so it's not going to be pretty up there. Good luck to any readers up there.  Stay out of the city, and preferably in a fortified place with back up power, water and your basic Bs - beans, bullets and band-aids.  And, seriously, New Yorkers.  Dump one of your fashion accessories and stash a few bags of Mountain House.  Just add water, and all.