Wherein tonight's episode may be called, "Beef prices at a 20 year high?  We haven't even started, yet".

Thanks to catching a few minutes of Mark Steyn sitting in for Rush today, I became aware of a ruling from the FDA that is going to affect beef prices.  Most people haven't thought of it, with the possible exception of folks who have brewed their own beer or wine, but commercial breweries have a big problem with the fermented grain they produce as a byproduct.  They also treat the grain a bit differently than home brewers.  After the most intense period of the fermentation cycle, the major breweries take the beer off the grain and sell the result to cattle farmers as feed, while the home brewer leaves the grain in to ferment out all of the sugars.  Selling the mostly-fermented grain ends up being good for the breweries, good for the farmers and good for "the environment".  The breweries make some money from the mash, instead of paying to landfill, compost or otherwise recycle it; the environment doesn't get industrial quantities of this waste, and the farmers get high quality feed for their cattle.


Farmers have been procuring and feeding their livestock spent brewing grains and grapes for centuries.  These livestock “happy hour” arrangements advance environmental sustainability, engender bonds among local businesses, and financially benefit both parties.  Farmers get low cost whole grain feed packed with fiber, protein, and, of particular importance to livestock in arid climates, moisture.  Alcohol makers save millions by not having to landfill the by-products.
...
On average, one gallon of beer will yield about a pound of spent grain. One gallon of bourbon yields more than nine pounds.
...
Brewers and distillers have tons of wet grain left over from making alcohol, and cows just happen to love it.

The change is that the FDA decided that when a brewery soaks the grain (or grapes) for a short period of time, and sells the residue, they have become food producers and fall under FDA regulations for that.  The new regulations and record keeping the FDA seeks to impose is going to increase the cost of this feed.  I haven't seen it being referred to as becoming cost prohibitive, but any increase ends up in the cost of beef from these cows.

The problem is that the FDA is regulated by a duly passed law called the Food Safety Modernization Act, and FSMA section 116 specifically exempts activities at facilities which “relate to the manufacturing, processing, packing, or holding of alcoholic beverages” which this clearly is.  As one reviewer said, the FDA is rewriting the laws they're supposed to be bound by and striking that exception out of the FSMA.  (And not to pat myself on the back too much, but I warned against trouble from this law long before it was passed.)

There's a couple of possible explanations.  The first is the simplest: the government is expanding like a virulent cancer and the agency sees more ways to dominate industries.  The more rules they write, the more power they have.  Alternatively, as Forbes put it, they are the hammer and everything looks like a nail to them; in this case, they see something that isn't regulated to absurd levels, so they need to make sure it is.  They can't allow anything to happen that isn't regulated, right?  Again, as Forbes put it,


[The] FDA is overstepping its constitutional authority to impose unnecessary controls on a centuries-old, local, safe, and environmentally sustainable practice which financially benefits all parties involved.

Let's see... proven, traditional technology; safe, environmentally better than alternatives; free market agreement that benefits everyone... how could a Fed.gov agency like something like that?  It needs to be destroyed.  Going to raise your food prices?  Go on food stamps like a good little comrade!

Of course after a little too much of that Happy Hour grain mix... 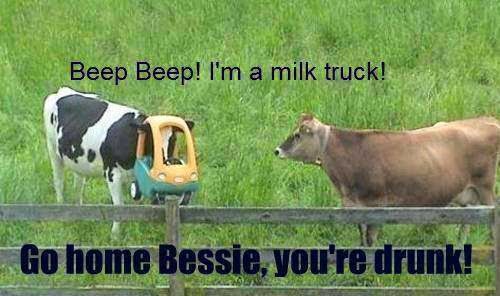