As the Tour de France Wraps Up

I know I've written about it a few times, but Mrs. Graybeard and I tend to follow the Tour de France every year.  No, we don't turn our lives inside out and watch the daily coverage every day, like we used to when we were Lance Armstrong fans, but we've watched a handful of stages this year and kept up with the progress.  We watched the insanity on Mont Ventoux last weekend.  Mont Ventoux, "The Giant of Provence" is one of the legendary mountain climbs in the tour, and the only climb to claim the life of a tour rider: British cyclist Tom Simpson in 1967.  (Other deaths have occurred in the tour, but on descents and other bad accidents).  This year, the crowds filling the road caused a camera-bearing motorcycle to slam on his brakes, which led to a chain reaction of cyclists smashing into the motorcycle and going down.  Tour Leader Chris Froome's bike broke, and his team car couldn't get him a replacement because of the traffic jam that caused the accident, so Chris started running up the mountain!  No one could recall ever seeing any cyclist run up the mountain.  There are "neutral assistance" emergency back up bikes, and they got him one that fit horribly.  His team car eventually caught up with him, got him a bike set up for him and he finished the climb.

The week before, riders started in a 100 degree hot valley to climb a different mountain, to Arcalis in Andorra, only to find a cold storm at the top of the mountain, dropping the temperature into the 40s and peppering the riders with penny-sized hail.

Tomorrow is the last mountain day and the last day where big changes to the final lineup are a real consideration: Megève to Morzine-Avoriaz.  This is almost in Switzerland, so after the stage the teams will be flown to Chantilly, outside Paris for Sunday's almost ceremonial ride into the city and the sprinters' race down the Champs-Élysées.  It appears Chris Froome will win his third Tour, putting him into a rarefied group of cycling legends - that haven't been kicked out for doping.

Shifting gears radically (see what I did there?), this year is the first year that Tour officials are monitoring bikes with infrared cameras for signs of cheating by embedding small motors in the frame to give the cyclist extra power.  They're calling this "mechanical doping".


Infrared camera guns, developed by the CEA (the French Atomic Energy Commission) were being used to capture the thermal envelop of each bicycle. Peculiarities in the envelopes would reveal whether or not a micro-motor was embedded in the cycle’s frame. The motors could be used to enhance the cyclist’s performance ― his hill-climbing ability or his speed on a straightaway ― but, used in a competition, it would be considered cheating.

As surprising as this might sound, it's not hypothetical.  This past January, the women's under-23 world cyclo-cross world championship had a competitor's bike seized by the UCI (competitive cycling's governing organization) - for being suspected of having a motor assist.

UCI inspectors had been examining bikes during the event, and the bike of European under-23 champion, Belgian Femke Van den Driessche was detained after something suspicious was found.

It was later confirmed that her bike did contain a motor and the 19 year old rider was given a six year suspension for cheating.   She was also fined 20,000 Swiss francs and ordered to pay legal costs.

Professional athletics is a domain of tiny differences between competitors.  In this year's Tour de France, Chris Froome currently has less than 5 minutes over the second place rider, after 82 hours of racing - 0.1% difference in time.  While that EE Times piece talks about 300 watt motors and using them for long periods, I don't think that's the scenario at all.  Picture the end of race stage.  Everyone has been putting out 700 or 800 watts - sometimes more - for as long as they physically can.  Everyone is turning themselves inside out.  Everyone's legs feel like they're turning to rubber.  A motor that gave a rider 50 or 100 Watts that no one could match would guarantee the stage win.  Think giving the rider just a little margin, not the power to ride the entire stage.  Just a small advantage to use when everyone is burned out. 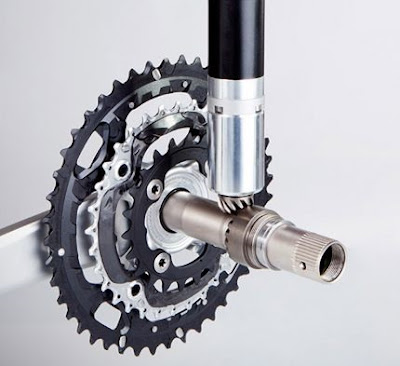 Cross section of how the motor is setup inside the seat tube of the bike, with a gear to add drive power to the cranks.  The battery can be in the seat tube, in the down tube, or in the saddle bag that many riders keep under their seat.  (Source)

The consistent testing of athletes for doping chemicals hasn't eliminated cheating, it just pushed the cheating out of their bodies and into the bikes.  It's probably better for the riders' health, but it's still cheating.  While the UCI originally addressed cheating at the bike by mandating a minimum weight that bikes can't go under, this is a new frontier.  It never ends.