The End of the Beginning

I don't actually know how long I've been making the parts for my CNC conversion job.  I find my earliest post was in June of last year.   Figuring a start date is complicated by the fact that I started out doing what the originator calls Phase 1; the simplest conversion that just puts motor mounts and stepper motors on the existing lead screws.  I switched over to the more complex phase 3 this past April.  I have posts from last September about working on parts.  Those parts took a long time to make because it was while I was still working and only had a few hours a week to spend at the machines.  I had virtually completed all of the metal pieces for phase 1, before deciding to switch over to his Phase 3 approach.  This uses ballscrews, and called for almost all new hardware.  Only one piece I had made for phase 1, the Z-axis motor mount, will be used as made.  Four of the threaded standoffs I made can be used after I shortened them 1/4".

Based on all of that, it's pretty fair to say I started making parts in early April.  This weekend I finished making parts, when I completed the two piece X-axis end cap I've been working on for several days.  I posted about it last week when I completed most of the work (except for cutting the tapered outline). 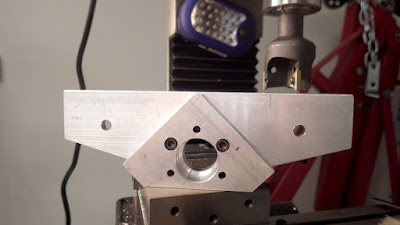 The tapers are cut upside down.  Basically laid out like this 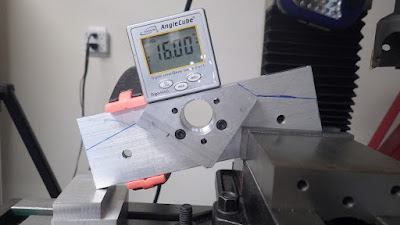 When the entire piece is tilted at the 16 degree angle like that, and you make a straight cut on the mill, you cut the taper onto the piece.  As you can see, I marked (messily) with a Sharpie and then cut the bulk of the metal off with my bandsaw, just using the milling machine to trim to the final lines.   (That black plastic clamp with the orange jaws on the end cap was just there to keep the angle indicator from sliding down the edge.  Not part of the setup.)  Two 16 degree tapers and two 45 degree tapers.  The actual cutting took almost no time.

So now that I'm done making parts, now what?  Now it's time to take apart the milling machine and start putting the pieces in place.  Before I do that, I'm going to paint the parts that will be visible to the user when the job is finished.  I spent most of the afternoon wet sanding aluminum pieces in preparation for painting.  I have one of the old "ray gun" powder coating guns from Sears.  Seems to still work, although it hasn't been in use in a long time.

Once the mill is apart, I need to cut areas out of the X/Y base, cut grooves into it and add the parts for a pressurized oiling system.  I'm going to add some sort of cooling system - spray coolant.  To do that, I'm going to need to build an enclosure.  All of the motors are going to have to be wired up, and an enclosure built for them.  There's a lotta lotta work left to do.  But I think I've reached the end of the beginning.


Now this is not the end. It is not even the beginning of the end. But it is, perhaps, the end of the beginning.  - Winston S. Churchill.