Science Story of the Year So Far

It hasn't gotten much press, but there's a very interesting little story going around in the radio astronomy world.  Radio astronomers have identified a set of signals that are either some completely new objects; new physics we don't have theoretical understanding of.  You will notice I said 'either' but didn't give an 'or'".  There is some chance that they're being generated by an intelligent source.  The signals share a mathematical basis that nothing known can produce other than a deliberately modulated transmitter.  (To modulate a signal is to add information to it; you're familiar with AM, amplitude modulation, and FM, frequency modulation.  Same idea.)


Telescopes have been picking up so-called fast radio bursts (FRBs) since 2001. They last just a few milliseconds and erupt with about as much energy as the sun releases in a month. Ten have been detected so far, most recently in 2014, when the Parkes Telescope in New South Wales, Australia, caught a burst in action for the first time. The others were found by sifting through data after the bursts had arrived at Earth. No one knows what causes them, but the brevity of the bursts means their source has to be small – hundreds of kilometres across at most – so they can’t be from ordinary stars. And they seem to come from far outside the galaxy.

The weird part is that they all fit a pattern that doesn’t match what we know about cosmic physics.  [Bold added: SiG]

Start with the idea that they emit a pulse that lasts a few milliseconds.  The great mathematician Joseph Fourier showed that any waveform can be generated by a series of different sine and cosine waves.  Today, virtually all signal processing involves calculating the Fourier transform of the signal.  This can be really time consuming to calculate, and in 1965 a couple of scientists developed a method of calculating this called the Fast Fourier Transform or FFT.  The FFT is so important it used in millions of pieces of hardware and software every day.

The entire purpose of that paragraph was to explain that by using the FFT, we can determine the frequencies which define the pulse.  Wavelength and frequency are simply related (frequency times the wavelength is the speed of light), and radio astronomers conventionally speak of wavelength.  The ratio of the longest wavelength to the shortest is called the dispersion.

Here's the part that's not fitting into any known physics.  Everyone of these Fast Radio Bursts have had a dispersion that's an integer multiple of 187.5.  Most have been the fourth multiple of 187.5 (most radio people will call that the fourth harmonic). 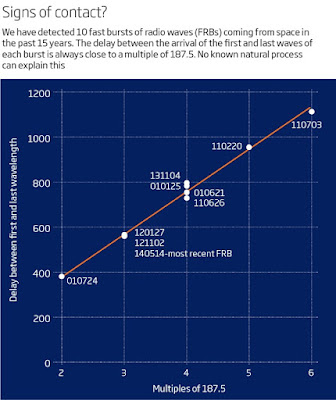 Now I find it necessary to point a couple of things about this that I see as problems.  The first is that there are only 10 of these FRBs that are on that chart.  That's all that has been observed.  Sometimes weird stuff shows up in small samples.  If the next ten come in with dispersions that aren't multiples of 187.5, the story breaks down.  The second thing is that statement that source power is one month's of the output of our sun.  That's based on them thinking they know where it's coming from.  Since these are short lived and there isn't tons of time to try to be more precise, I see these as sloppy numbers.  If the FRBs are substantially closer, their output is substantially lower.  Conversely, if they're much farther out, they're putting out even more power.

When nature throws an unexpected surprise at you, the most useful thing to do is consult with the theoreticians who have models that explain just about everything else.  Astronomers have come up with some scenarios that they think could explain the short pulses with extremely high energy.  There is currently no way to verify any of those as correct.  While everyone has to take pains to say there's just as much evidence it's contact binary stars as aliens (none, to be precise), intelligence can't be ruled out.  The "Mother Nature News" website posts something to ponder.


If the radio bursts do turn out to be beacons from extraterrestrials, which is a possibility that can't be ruled out, then there are some exciting but scary scenarios to consider. FRBs would not be easy messages to send. The amount of energy required to send such powerful bursts from another galaxy is hard to fathom. Such alien technology would be far more advanced than anything we can imagine, with the ability to harness power equivalent to the sun.

In other words, any face-to-face encounter with such a civilization may not end well for us, if they turn out to be hostile.

Unless that along with developing the ability to put out the energy of an entire month's worth of the sun's output in five milliseconds they also developed some way around the speed of light speed limit in the universe, there's little worry that we'd ever come face to face.  Still, without trying to do numbers, it sounds like a society with bows and arrows coming in contact with one that has nuclear weapons.

While the possibility that the answer could be radio beacons designed to attract technological civilizations is appealing to us sci-fi geeks, we have to admit that the energy requirements are so great that it's likely an astronomical phenomenon.  A wild card is the possibility that a satellite the researchers don't know about (a classified satellite) is producing these signals, and they just appear to be coming from deep space.  That would make them much, much lower power and easier to explain.  A couple of times in the past, signals that generated great interest turned out to be satellites no one was supposed to know about.  I recall one in the early 1990s, and search engines appear to show others.  Another possibility is unintended interference between different satellites or a satellite and a transmitter on earth - such as  intermodulation distortion products.  The team at the Parkes Telescope in Australia discovered that what they thought was a deep space source was actually the microwave oven in their break room.

Folks who have paid attention to this subject will probably recall hearing about the "Wow!" signal, detected in the Search for Extraterrestrial Intelligence efforts in 1977.  It occurred once, and never repeated itself, so it's pretty much disregarded.  Lately, a theoretician has found a possible way to explain it using nothing but comets outgassing hydrogen.  They're attempting to observe some comets to see if they can confirm his theory.

I think of this as a total win-win.  If we find out it's the Federation looking for societies that have gotten advanced enough to build radio telescopes to join them, that's pretty hard to beat as news goes.  If we find it's totally new physics no one has thought of before, and the universe is a more amazing place than we thought before, that's pretty darned cool, too.