Project of the Week

Well, it's no so much the project of the week as the parts of the week I've been making for my Grizzly CNC conversion project.  It's that enormous X-axis end cap I've been talking about.

Let me bottom line/short version the story first.  I've got a decent Rev 1 set of parts close to finished and they look like they'll work.  Yes, there are some goof-ups in there, but I don't think there's anything insurmountable.  First, the two piece end cap. 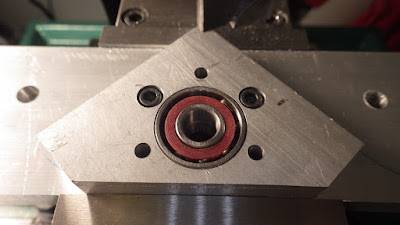 I started with the drawings that I purchased for the end cap, and then split them in two.  One became the small top piece while the other became the big bottom.  I partitioned features between them so that when the two pieces are joined, the result should be the same as the one piece end cap.  For example the original part had a dual diameter bore for the bearings: 1.024" that went down 0.638" and the rest of the hole is 0.875".  I split that into the top and bottom pieces, so the top is the larger diameter and the bottom piece has two diameters.

The goof up concerns those three holes around the bearings you can see in the top piece.  Those are not threaded and are sized to clear an 8-32 screw.   The base of the end cap (the large rectangle) has those holes threaded.  I moved them down from the top piece without it registering in my mind that the screws need to thread into the bottom piece but can't because they're not long enough to make it to the bottom piece.  What I missed is that motor mount I mentioned that goes on top of this piece.  The stack up looks like this (the parts are just stacked - no fasteners). 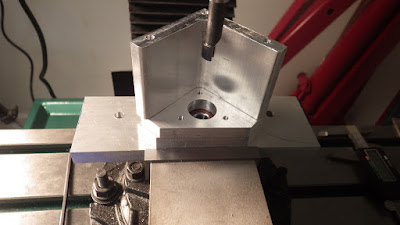 There's another problem lurking in this piece, which is that when I transferred the base (7x2 piece) from the Sherline, where I drilled all the holes, onto the big mill for boring the holes, I flipped it upside down!  So the view you're seeing is supposed to be, and now is, the top, but the two mounting holes left and right of the 1" thick area are counterbored on the bottom.  That's also probably going to be fixed by two new screws.

This part doesn't have the stylin' tapers that the original part I started from has.  I'll have to see if I can figure out how to add those without barfing anything up. 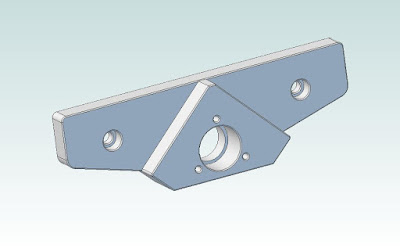 Every part's a puzzle.