Dow Back Near All-Time Record Levels 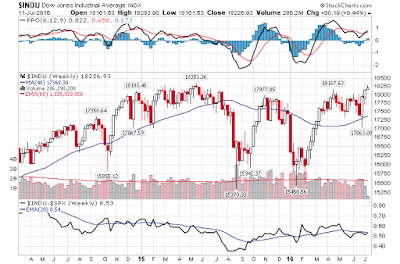 I don't buy that the world is in great financial shape.  The world is awash in debt, flooded with phony money by the central banks.  There's about $11 Trillion dollars in negative interest rate debt - that insanity that charges bond buyers for the privilege of loaning money to the issuers.  The phony money distorts everything, but first and foremost the stock markets.  Distorting the stock markets is the central banks' intent, after all, as people in our country have a tendency to judge their personal degree of "well-off" by the price of their house and the value of whatever portfolio (401k or whatever) they identify with.  Pumping up both house prices and the DJIA were their goal, and if they create enough money out of thin air, it has to affect them.

Friday’s jobs report said that 278,000 Americans found work in June – up from 11,000 in May. This is one of the things that commentators use to justify the stock rally last Friday and today.  But a single month’s number means nothing.  It's just noise.  Even honest numbers should be disregarded over smoothed series and trends; single points just don’t have any useful information.  Worse, the Fed.Gov numbers are so manipulated, massaged and then sugar-coated, they're likely to make you sick.  Or give you diabetes.

The only thing the DJIA proves is that all the talk about a financial crisis from the Brexit vote is much ado about nothing.  The central banks, in their roles of controllers of All the Money in the World, have much more affect on these things than the mere machinations of countries.  Countries voting to leave the EU and the beneficent mercies of the God-like European Central Bank?  Who do they think they are?  Sovereign governments that represent the people?  Please.

Much like we didn't fully realize how valuable a real free press was until we lost it, we're going to have hammered into our heads how important real money is as an information system once this mess collapses.