Keep An Eye on the Skies This Weekend

This weekend, NASA's Juno orbiter mission to Jupiter begins the most dangerous part of its mission since its launch back in 2011.  They highlight what's coming with a dramatic "trailer" video (embedding is discouraged - but watch it fullscreen, anyway).

NASA has a history of setting the timing up on major missions to coincide with Independence Day.  This coming Monday, the Juno orbiter will plunge closest to the giant planet and begin its radio astronomical mission to study the Jovian system.  These missions are choreographed to a degree virtually nobody can understand.  A launch window is chosen and an arrival data planned, but once those are set, there's quite a bit of freedom to move the trajectory and exact timing around.  The mission timing was worked out years ago.  The Juno probe has already been sent and began running its approach sequence, which will see the probe "dive" into the system from the North Pole toward the south, and achieve the closest approach ever to the giant planet, 3000 miles above the cloudtops.  It is totally out of the hands of the Earth-bound mission controllers.  Jupiter is currently around 48 light-minutes from earth, so that the probe must rely on itself and the uploaded software. 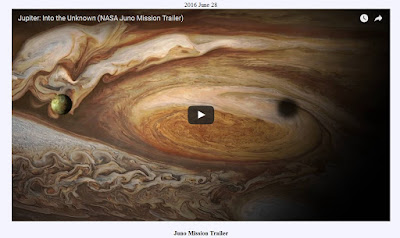 I'm a bit oddly mixed in my reactions to this mission.  For the one side: sure, it's killer cool.  It's as impressive as anything, and for the bang per buck we typically get out of unmanned missions, I'd much rather see these pure science missions than anything involving ISS, or a shuttle, or - God Forbid - another climate change mission.  One the other hand, the program office seems to have decided they need to do more "out reach", defined as make it interesting to people who don't think about actual science at all.  They've hired that insufferable asshole "Bill Nye the Arrest All Who Disagree with Me Guy" for educational outreach.  I don't know, maybe he has abilities and skills at educational outreach for people with less than completely formed brains.  Not from what I've seen, but ... whatever.

So I'll keep an ear on the radio to see if I hear if they made it.  See if anything cool pops up.  I think the only things that could stop them at this point would be debris they can't know of; perhaps some chunks of ice or captured asteroid debris, or something that got caught up in Jupiter's gravity well that the probe smacks into.  They're probably not gonna repeat the metric conversion screwup from the 90s.  Just sayin'. 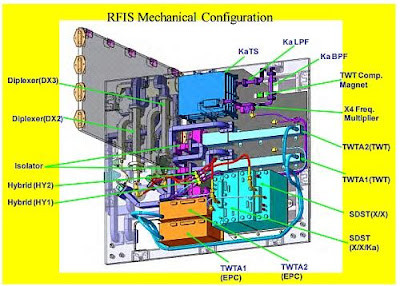 From Planet Analog Newsletter, this diagram of Juno's radio deck shows the major assemblies.  TWTAs are high power vacuum tubes, Traveling Wave Tube Amplifiers; the individual tubes are called TWTs.  Combined with the operating frequencies (receive on 7153.065586 MHz and transmit on 8404.135802 MHz), you have enough information to decide how to build a receiver for your backyard and listen directly.  Well, not really.  You could start by copying a station from NASA's deep space network.  Unless you've got a really well-stocked junk box and lots of "mad skillz", it's probably a big project for the last minute.

Posted by SiGraybeard at 3:40 PM