Is There More to the Philando Castile Case Than Meets the Eye?

I think that of the recent rash of news stories involving police-shootings, the one that has captured the most attention from gunnies is the horrible case of Philando Castile, the Minnesota man who was a concealed carry license holder shot to death during a "routine traffic stop", as the story goes.  I'd hazard a guess that since so many of us are concealed carriers, this scenario is our worst nightmare, or close to it.

Some things about that never seemed quite right to me; the first was the chatty girlfriend who live streams the event instead of calling 911 and seems almost emotionally uninvolved in the whole event.  She doesn't seem emotionally attached to Mr. Castile at all, more concerned with putting a video online.  Her "don't tell me he's dead" pleas sound as emotionless as checking off a box on a form.  The second thing that I noticed was that the traffic stop was about a bad tail light, yet the video appeared to be in broad daylight.  I suppose that can happen, but I've never heard of it, or had it happen to me. There are photos online, though, that show the car after dark and both taillights appear to be working.

The Conservative Treehouse has been following this story closer than most and poking it with sticks.  They've turned up some things that, as least to me, demand attention.  The most trivial is that the county where is this occurred, Ramsey County, MN, has no record of issuing Mr. Castile a CCW.

This could be nothing.  He could be from the next county over or the opposite corner of the state.  It isn't a critical point, but at this point it can't be verified he had a CCW permit, or who issued it to him.  Far more important is a trail they weave showing that Mr. Castile was pulled over because he physically matched one of two suspects who robbed a store at gunpoint.  A store very close to where Castile's stop and shooting occurred.


The people at GotNews chased down the social media profiles of Diamond and Philando, and unfortunately a familiar set of social behaviors surfaces.

This is a confusing situation.  Depending on his exact ties to a gang, it could make it unlikely he really was a CCW holder.  The pictures on Conservative Treehouse include this: 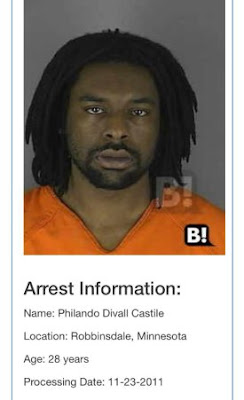 Arrested, of course, doesn't mean convicted and it's all still possible that Castile had a valid concealed carry permit and everything is just as reported.  It just seems to be getting harder to think that.

Doesn't it change the whole scenario if, instead of a routine stop for a broken tail light, the officer was pulling over a vehicle containing a B.O.L.O driver who fit the exact profile of an armed robbery suspect from a few days earlier?  Even if he just happens to have the incredible misfortune to look a lot like the photos of the armed robbery suspects?  As Conservative Treehouse puts it:


Wouldn’t it be entirely plausible for a rather concerned police officer to be additionally, well, twitchy perhaps, about a possible armed robbery suspect -pulled over- who identifies he is armed inside the vehicle, and then makes an unanticipated movement toward….

Well, I think you get the overall thesis.

I'll be honest: I'm not 100% sure what to make of this.  In broad overview, the story fits with what has been reported but adds a lot of detail and nuance.  Their sources seem solid.  They link to local news outlets (self-starting audio warning) throughout their investigation.  I'm only sure it bears keeping up with the story.  Miguel reports the Second Amendment Foundation is following this case and pushing for a full investigation, which is good.  The officers are suspended (as always after a shooting, it seems) and there's apparently a real investigation going on.

What's that line about, "may you live in interesting times"?