It's hard to estimate how many bolts are sold in a year, but suffice it to say there's a lot.  Bolts are so ubiquitous that no one questions their history and where they came from; they've just always been there.  Bolts as fasteners that allow assembly of complicated assemblies were around before the Industrial Revolution, perhaps as far as 400 years ago, although development sped up as the Industrial Revolution unfolded.


The “History of the Nut and Bolt Industry in America” by W.R. Wilbur in 1905 acknowledges that the first machine for making bolts and screws was made by Besson in France in 1568, who later introduced a screw-cutting gauge or plate to be used on lathes. In 1641, the English firm, Hindley of York, improved this device and it became widely used.

In critical applications where the reliability of the bolted joint becomes important, bolts are pretensioned; that is they're stressed until they stretch a desired amount.  The restoring force of the bolt trying to return to its un-stretched length keeps the hardware tight and doing its job.  The most common way of prestressing a bolt is to torque it to some specification.  From a purist's standpoint, and one I recall hearing in classes, using a torque wrench to apply a known amount of torque is not the same as applying a known amount of stretch to pre-load the bolt.  When the torque is applied, the user is counting on that torque turning into the exact amount of stretch the system should experience, but that depends on everything else being perfect.  All the torque wrench can really tell you is how hard it is to turn the bolt, and anything from a badly threaded nut (or bolt) to a misaligned bolt/nut combo to something as simple as dirt under the bolt head can affect that.

A torque wrench can be misleading, but direct measurement of the stretch is difficult to impossible in many situations.  How does anyone know they got it right?  A company called SmartBolts has developed a product intended for verifying that the preload on a bolt is correct at a glance.  There's an indicator in the head of the bolt that changes color from a red when the bolt is completely loose to black when properly tightened (stretched).  I don't see how it could indicate the bolt was stretched too far, but understretched appears to be what it was designed to overcome. 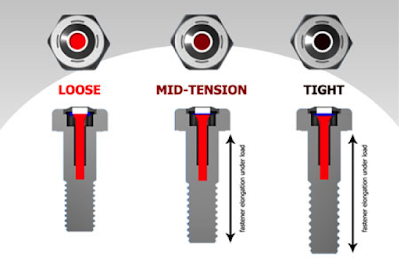 Seems like a nifty little idea.  When you look at their website, there's more information.  As you might expect, due to the size of the components that need to go into the bolt, this is for larger sizes only.  The smallest they list is 7/16" diameter, so you're not going to see this on any 1/4-20 or 10-32 hardware for a while (if ever).
Most of us don't work with bolts larger than 1/2", if that, and the added complexity from the indicator is going to price this out of the reach of all but the most critical applications. As a guess, things like aircraft, possibly bridges and buildings, large trucks and other heavy equipment, especially equipment that's life-critical.  Still, I can see how this might simplify life on the assembly line and make the assembly operations simpler, faster, safer.