Updates and Catching Up

I haven't specifically updated my personal situation since I was discharged from the hospital.  I have been posting pretty regularly, so I think anyone keeping track will see I'm doing steadily better.  So just in case anyone was curious...

Two weeks post surgery was two days ago.  I saw the surgeon for followup last Thursday, and he discharged me to my GP for care.  All of the surgical dressings are off and I'm adapting pretty well to not having a gall bladder.  Not much in the way of stomach upset and that was all last week.  By coincidence, on Tuesday we had to drive up to the hospital to get copies of some records I need to bring to a followup appointment, so two weeks post- was the first day I drove and walked around parking lots and buildings since before everything hit.  The car's temp sensor dipped below 98 degrees once, when we got into the shadow of a cloud for several seconds.  It spent most of the time at 100 or above.  A bit on the hot side here, but not freakishly unusual.

I'm aware of the "don't push it!" axiom - and Mrs. Graybeard reminds me regularly - but I have gotten back into the shop and resumed cutting metal for G0704 CNC conversion. My efforts have been directed to the big X-axis end cap I've written about several times. 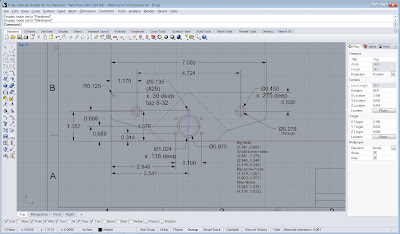 As I talked about, I'm converting it to two pieces: a large, 1/2" thick end cap (bored and drilled according to the original design) and a smaller, 1/2" thick motor mount/bearing holder that will screw to that piece with two 8-32x3/4" screws.  The original design had an area of the end cap here (marked by dotted lines) that was 1" thick.  Changing it to two pieces makes the big hole bored in the top piece a single diameter, and the dual diameter bore in the bottom piece changes its depths.  The area that was 1" thick gets a 3/8" thick motor mount/bearing holder on top of it.  My approach yields three pieces instead of two, but the overall dimensions are the same.  Just the two new screws are added. 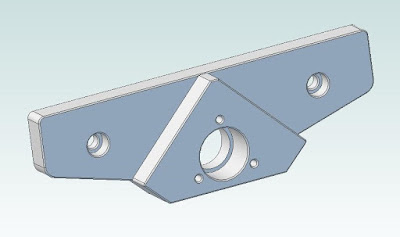 Original end cap from G0704.com - it starts as a chunk of 1" thick aluminum and has most of it thinned away to 1/2" thick.  On the DVD, Hoss shows it being made, but he already has his G0704 running CNC and just lets it run for a while.

As an aside, I have all the parts for my guitar meta-project but haven't actually assembled anything.  In that linked piece I said, "I could get a set of tuners, nut and saddle and have it able to make sounds for under $100 - maybe half that if I use no-name parts".  Actual out of pocket was $27, including shipping.