Politics is for scumbags.  In this case, the DNC are the scumbags de jour.  I'm not aware of the RNC doing something like this, but will publish it if I find it.

Thanks to the leaked DNC emails from Wikileaks we can see a DNC plan to try to make Trump look like a "sexist pig".  If anyone would be stupid enough to believe it.  (H/T to 90 Miles From Tyranny)   Breitbart has the story.


In an email dated May 18, 2016, Christina Freundlich, Deputy Communications Director at the DNC proposed that the Democrats impersonate the Trump Organization on Craigslist, placing a fake ad for “hot women” aimed at making the Republican candidate look as sexist as possible.

Now, if Christina's name should sound familiar to you, and you're not an Iowa Democratic Party insider, it's probably because she got some attention for taking a selfie at the site of an explosion in New York City that knocked down a building and hurt a lot of people.  A lot of people who live in the area were offended by that.

Should you find this email interesting reading, the full archive of emails can be browsed and searched at WikiLeaks’ site.  You can be sure it's being searched as we speak.  The complete text of the mail follows:


On Wed, May 18, 2016 at 7:09 AM -0700, “Freundlich, Christina”  <<FreundlichC@dnc.org<mailto:FreundlichC@dnc.org>> wrote:
Mark and Luis –
digital created a fake craigslist jobs post for women who want to apply to jobs one of Trump’s organizations. This will be a microsite and we still need to send it to Perkins. Since we will be pitching this, need your approval please. Thanks

Seeking staff members for multiple positions in a large, New York-based corporation known for its real estate investments, fake universities, steaks, and wine. The boss has very strict standards for female employees, ranging from the women who take lunch orders (must be hot) to the women who oversee multi-million dollar construction projects (must maintain hotness demonstrated at time of hiring).

Title: Honey Bunch (that’s what the boss will call you)

Job requirements:
About us:

We’re proud to maintain a “fun” and “friendly work environment, where the boss is always available to meet with his employees. Like it or not, he may greet you with a kiss on the lips or grope you under the meeting table.

Ms. Freundlich's boss in this matter, DNC Communications Director Luis Miranda, was perfectly OK with running this fake ad, as long as "all the offensive shit is verbatim".

This strikes me as clumsy, crude, juvenile humor not even at the college level, and a reader would need to have the IQ of a guppy to believe this is real.  But "IQ of a guppy" and "dedicated Democratic voter" kinda seem to go together - at least from what I've seen.  Congratulations Ms. Freundlich, you're our scumbag of the day. 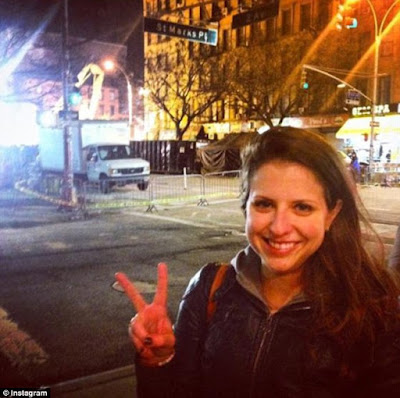 To paraphrase momma a little bit, "beauty is only skin deep, but scumbag goes all the way to the core".

Posted by SiGraybeard at 1:19 PM