Russia Bombs US SpecOps Base

When I read Day by Day Cartoon today, I didn't know what it was talking about.  Easier to post than describe:

Chris Muir usually gives some link or reference to the story, but Breitbart has it (and H/T WRSA).  Russia did indeed bomb "a “secret base” near the Jordanian border in Syria used by “elite American and British forces” as part of efforts to strong-arm the Obama administration into agreeing to cooperate with Moscow,”.  This was back on June 16th.  Apparently their intelligence is good enough to conduct the bombing when the US and UK special forces weren't there, however four U.S.-backed Syrian rebels were killed by the Russians. They kill US-backed Syrian rebels pretty regularly if you haven't been keeping score.


The risk that U.S. and British forces could have been killed at the border garrison hardened opposition at the Pentagon and the CIA to accommodating the Russians. But White House and State Department officials, wary of an escalation in U.S. military involvement in Syria, decided to pursue a compromise.

For reasons only Putin knows completely, Russia upped the ante on July 12, by dropping cluster bombs on another base near the Jordanian border that housed hundreds of family members of CIA-backed fighters and other displaced Syrians, adds the Journal, citing unnamed U.S. officials briefed on the strike and rebel commanders.


At least “two young children, aged two and three, were killed along with two young women and a man in his mid-50s,” WSJ learned from Tllass Salameh, a commander with the Lions of the East rebel group which works out of the base.  He added that “48 people were injured, all civilians.”

Oh, there was the pro-forma US and Russia disagreeing publicly, but that was followed by the inevitable US concession.


A provisional agreement reached by Secretary of State John Kerry in Moscow last week—over Pentagon and CIA objections—calls for the former Cold War adversaries to join forces in strikes against the Nusra Front, Syria’s al Qaeda affiliate. In exchange for the U.S. easing Moscow’s international isolation, Russia would halt airstrikes on the U.S.-backed rebels and restrain the Syrian air force.

It's noteworthy that these joint US/Russia missions will also target ISIS, but the Nusra Front is one of Syria's most effective enemies, and Russia has gotten us to agree to fight their enemy.  Ironically, since they're an Al Qaeda franchise, you'd think we would already be fighting Nusra.  Russia is committed to propping Assad up.  We'll see if there really ever are any substantial Russian attacks on ISIS.  I suppose the State Department will routinely disagree with the CIA and Pentagon, but I find it kind of noteworthy how we got here.  Putin ordered the bombing of two secret US bases and did so when US and UK special operators weren't present.  He broke some stuff as a show of force, or as that SEIU thug Andy Stern put it, "the persuasion of power".  It shows how Obama won his no balls peace prize.

There's a meme about Putin I've seen on Pinterest that seems to work here. The bottom half doesn't really apply to Syria, but the comparison of their styles is right. 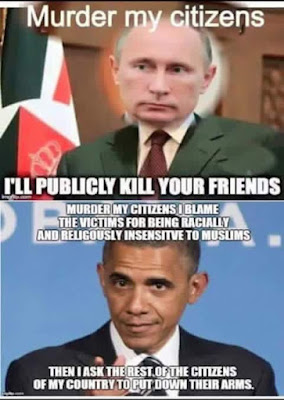