I Just Want to Point Out

Today's the end of July.

In this month, I've done "Techy" posts on an AI system for running air to air combat that runs on a Raspberry Pi and never loses to a human fighter pilot instructor; wearable gesture sensor interfaces to a computer, a camera lens based on mimicry of an obscure Nigerian fish's eye; a look at the code used on the Apollo Guidance computer; genetically engineered silkworms producing a spider silk that may become the next generation of bullet resistant vests, and Smartbolts for high end, critical uses.

I've done several posts on machine shop work: how I designed a new part for my CNC conversion project when it seemed highly impractical to make the design I had bought; showed it after it was built; and the steps it took to finish the part.  From there I transitioned to how I powder coat painted, described the difficulties I encountered and how I got around them to paint everything.  Finally, I showed a new method of cheating in bike racing using a motor that can fit in the seat tube of a bike.

The shop and general techy posts were the majority of what I talked about, but I also talked about FBI director Comey's abandonment of the rule of law; the Philando Castile case and some things that were turning up that didn't fit the narrative; added a couple of pieces on the effects the central banks are having on everything; made fun of Bernie Sanders supporters for not being able to see that they're not only protesting the wrong thing but that the solution they propose is the cause of what they're protesting; and pointed out a particularly stupid scumbag in the DNC power structure.

Oh, and I included a piece on Fast Radio Bursts in radio astronomy and their implications, the strange Mandela effect and stinkin' thinkin' that entails, the coup in Turkey, a storm chaser's weather video, the stupidity and logical problems with Obama's constant harping on gun control at the most unfortunate times.

Not to mention a photograph of Colonel Sanders and Alice Cooper. 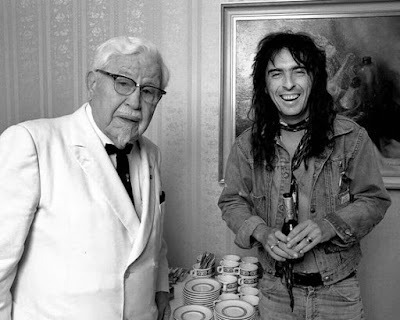 I try to be a full service blog, and I don't see that wide a range of subjects in any other blog I know of.  Hope y'all enjoy it.

Posted by SiGraybeard at 3:00 PM