If you saw the Spider-man movies (or are familiar with the comic books graphic novels), you'll know that there's always a company trying to farm spiders to harvest spider silk.   It turns out that's really not that bad an idea.  As a fiber, spider silk has mechanical properties far better than many fibers available (pdf warning).  It has several advantages over Kevlar, currently used in thousands of products.

Unfortunately, there's a serious problem.  Spiders are nasty animals to try to farm and get to produce silk for you; they're territorial and cannibalistic.

Who cares?  The Army has given a company called Kraig Biocraft a $100,000 grant to develop and test ballistic body armor based on spider silk.  Sort of.  Because of spiders' nasty dispositions, Kraig spliced the genes from the spider into domesticated silkworms, creating a new fiber they call Dragon Silk.  The result was a composite silk that was as strong as normal spider silk yet much easier to produce.


Dragon Silk has a number of applications, particularly in surgery. Many sutures are done with biodegradable silkworm silk, but the increased strength of Dragon Silk allows for much thinner threads. This is useful when performing surgery in sensitive areas, such as the eyes and brain.

With a breaking strength a bit less than Kevlar but superior elasticity, the company plans to make different fabrics and evaluate them.


The company will produce a series of ballistic "shoot packs" with different thread counts, thicknesses, and construction techniques to see how the Dragon Silk performs. If it meets expectations, the Army is prepared to increase the grant to $1 million. 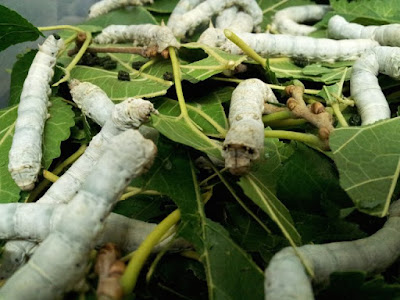 I don't know.  It seems innocuous enough.  Folks have been farming silkworms for centuries, and in more modern times, have been researching the mechanical properties of spider silk.  There appears to be a handful of companies on the verge of commercializing spider silk.  What could go wrong?

Still, I just can't quite shake the feeling that I've seen this movie several times, and there's always something in those spider farms at Oscorp in those Spider-man movies that messes everything up...