The Coming Revolution in Micro Robotics

While Artificial Intelligence gets a lot of press and is probably the most talked about coming technology.  You've probably heard the story about Bill Gates, Elon Musk and Steven Hawking all warning of the dangers of "strong AI".  Escaping from an AI that goes all Skynet on our primitive asses is one reason that Musk wants to colonize Mars.

A technology that's advancing arguably faster than AI is micro robotics, or microbotics; robots that are around a millimeter long (~.040") or smaller.  Did you ever see the 1966 SciFi movie "Fantastic Voyage"?  An important scientist suffers an assassination attempt.  In a bold move to rescue him, a submarine and its crew is shrunk with a secret ray and injected into him.  The miniature submarine will navigate through his body until it comes to the damage and repair it from the inside.  With suitable dramatics and heroics involved.

While neither submarines or Raquel Welch in a white wetsuit are mentioned in anyone's plans, the idea being widely discussed is to use miniature robots in place of our cruder tools for micro-surgical repairs or to deliver chemotherapy more precisely:


[Researcher Bradley] Nelson wants to load tiny robots with drugs and manoeuvre them to the precise location in the human body where treatment is needed, for instance to the site of a cancer tumour. Alternatively, the tiny creatures could also be fitted with instruments, allowing operations to be performed without surgical intervention. The advantages compared with conventional treatments with drugs are clear: far more targeted therapy, and as a result, fewer side effects.

Many of the elements of microbotic tech have already made it into our lives, they're just a few generations away from the right size.  Our smartphones and tablets almost all have a gyroscope that operates on MEMS (MicroElectroMechanical Systems) principles.  Hundreds of millions of MEMS accelerometers are used in automatically-retracting seat belts in hundreds of millions of cars around the world.  It's the continued advancement of MEMS and nanoscale machinery that will bring us micro- and eventually nano-sized robotics.


The revolution will come when these devices reach a sufficiently low cost and a high level of sophistication—i.e., when sensors, processing power, a mode of locomotion, and a method of storing or harvesting energy are combined. As research in MEMS and nanotechnology inexorably progresses, this will happen, and micro-sized robots will make the transition from conceptual curiosities to fully realized parts of our lives. 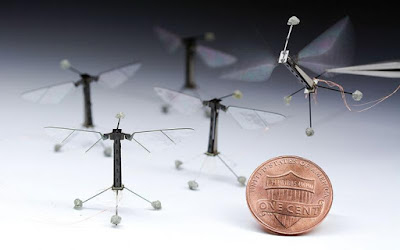 In addition to the medical uses already talked about, we can expect to see medical robots that will map our unique physiologies, clean the plaque out of arteries, and destroy kidney stones. They will help diagnose and combat disease and be used to fight cancer.  I believe that before they're injected into people on a large scale, microbots will monitor and perhaps repair machinery and infrastructure. They will also become another tool for manufacturing.

As with AI, there's a darker side to microbotics.


What effect will legions of nearly invisible robots have on our privacy? Will they close the gap between the part of our lives that is logged and recorded and that final bit left to us? They may be exactly what our neighbors, or employers, or the powers-that-be use to take the last of our privacy. Every time you leave work, you could be carrying an army of microscopic voyeurs.

Microbots will change warfare. They can be used to attack an enemy’s weapons and equipment and the manufacturing facilities that produce munitions. They will almost certainly be used to attack the enemies themselves in some capacity. Even if they aren’t used to kill, they may be used to disrupt an enemy’s biology enough to reduce their effectiveness. Microbotics used for warfare may end up being classified as a kind of weapon of mass destruction.

It should come as no surprise that SciFi writers have already gone here, too.  Neal Stephenson's The Diamond Age  explores the concept of well-resourced groups fighting each other with clouds of microbots.  Who launched the attack against a nation may never be known, and the only clue would be clumps of the microbots littering the ground - looking like dumped printer toner. 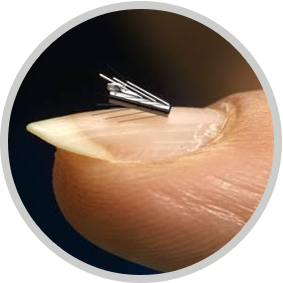 (ViRob - a robot currently undergoing tests for treating Hydrocephalus, also known as “water in the brain,” in both infants and the elderly.  It would be left in place permanently, or long term.)

It can be effectively argued that all technologies bring aspects that are scary, regardless of all the good they might bring; and virtually all technologies can go through a period of waiting for consumer acceptance.  In this case, microbotics and AI both share scary dark sides.  It's also the case that technologies look less scary "in the daylight"; once we see them and get familiar with them.