I was just going back through the blog looking for anything I've written on the GB-22 and it doesn't look like I posted anything since I finished it - for the first time - at the end of May.

According to the in-process pictures I've got on my drive here, I played with it until mid-July when I gave up and thought I'd let it sit until I could figure out what to do next.

The GB has one overriding problem.  It just doesn't work reliably.  It doesn't really work at all - the cheapest, crummiest firearm you can find works better.  If I had to blame it on something, it looks as though the slide doesn't slide forward fast enough or hard enough to fire a .22 round.

All of my tests have been with the same box of ammo, a box of Winchester White Box 555 that I've had since before the Great 22 Scare a few years ago.  I drilled a hole in a piece of 3/4" thick oak that's smaller than the rim, but that fits the brass snugly.  Push a round into the oak, pull the bullet with pliers and dump the powder into a plastic bowl so that all that's left is the primer.  What I'm doing in the shop is dropping the slide on the primer.  It's frequently not as loud as a hammer blow on a nail or piece of metal.  I've had rounds go off that I haven't even heard, and only when I pull the brass do I realize it's black inside and smells of the primer having been ignited.

I've had the occasional round that fired on the first drop of the slide, but I've had others that I can drop the slide on as many as 10 times without them going off.  I then test those in a .22 revolver.  Of the 50 or so rounds I've tested this way, maybe two that didn't fire in the GB also wouldn't fire in the revolver and in one of those the primer had broken into chunks that fell out in my hand.

Work for the last few months has focused on getting the slide to move faster.  Concerned that the firing pin wasn't leaving as deep an impression as it should, I spent some time trying to remove the original firing pin and replace it with one that is shaped more like the pin in a 10/22 (by the imprint it leaves in the brass).  The pin was bonded into its piece of the slide with red LocTite and nothing that I did would break that free, including putting it in my gas oven at 550 for an hour.  I eventually drilled a hole on the opposite side of the chamber and put in a second firing pin.

The prints I bought say that the frame should be ".003 to .010" under thickness" of the part of the slide that holds that firing pin.  Both of those pieces are nominally 3/16 thick, which means 0.1875".  The mill tolerances, though are such that (I suspect) Serbu's sheet came in thinner than his slide piece, while mine came in thicker.  My slide is .188"; the frame was .191 or .192.  That meant I needed to reduce the thickness of my frame piece down as much as .014. Short of using a surface grinder, how can one do that?

The accepted answer is to put the metal frame on a sheet of rough sandpaper and sand it down.  My first attempt was using a Dremel-like tool with a grinding wheel.  It ended up being impossible to keep the area flat, so on to the sand paper.  First, I wrapped a 1-2-3 block with 150 grit sandpaper and worked on it for several hours.  I successfully thinned the frame.  Somewhat.

All measured values with a B are before the hours of sanding and A values are after.  You can see that there is improvement, but not everything is ".003-.010 under" the 0.188 slide.  At this point, I was running out of sandpaper, but tried taping some to a work bench and just sanding that area.  The problem is that it takes a long, long time to remove a little metal and I was just getting nowhere.

There was a pause here to try to troubleshoot how fast the slide moves, but I was unable to find a camera with fast enough exposures to make meaningful measurements.  This was the end of June.  Tests at this point showed the same problems.  Some rounds would fire with one or two drops of the slide, others would never fire, for no obvious reason.  So I said , "*&!% it" and I'll get to it later.

With the eclipse trip over and no other distractions, I decided it was time to address this again.  My plan was to resurrect my fixture, put the frame on the big mill and thin the frame out with a large cutter.  I would zero the mill's Z (vertical) axis where the frame is the thickest (I chose the red circle on that drawing), then take off .001 at a time until it was uniform thickness or at least being cut the whole way around.  If you look at those numbers, you'll see the most important places to cut are both ends of the travel.

I did a careful setup on my tooling plate, added a couple of threaded holes for 10-32 screws so that I could use some of the Sherline hold down clamps I have.  This picture is after I did the cutting, but shows the clamps.  If you look closely, you can see machining marks over most of the path of the slide, except for a little spot in the skinny beam that holds the trigger; the area visible just above the bottom clamp. 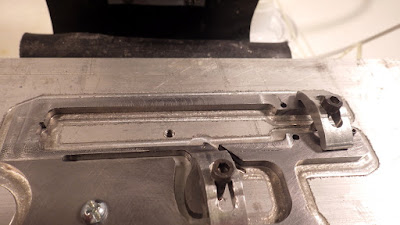 I started in the upper right of this picture, and used a 1/2" diameter end mill that I had zeroed on the handle where no sanding or anything had been done.  I lowered the cutter until it just touched the surface there, then dropped it .001 and made a cut counterclockwise around the rectangle.  On the first pass, it cut in that corner and only a little of the top; it didn't cut over much of the path.  I lowered it .001 at a time until the cut was continuous - everywhere but the trigger seer.  I know that's too thin as it is.  You can see the cut marks show that the long, thin, spring beam wasn't touched over about half its length.

The total depth of cut was .007.  Originally, the tool path didn't cut the leftmost portion of the frame so it had a .007" step there.  I cut the left end of the frame to the same thickness as the rest of the area where the slide goes.

After puzzling over what to do to confirm it, I thought the most reasonable thing to do would be the acid test: put it together and try to shoot some primers.

Not even the slightest bit better.  The first primer popped on the third slide drop.  Out of six rounds not one more primer would pop.  All of them popped in the revolver.  Midway through the test, I added some oil to the frame to see if that helped, but nope.

So I took it apart again and got the micrometer to remeasure it.

You can see the thickness go down in each set of measurements Before, After and today's Thinned.  Furthermore, while the frame isn't the same thickness everywhere, (1) with one or two exceptions (on the bottom set), you can see that the measurements are pretty much really .007 thinner and (2) there's less variation in the measurements. The top is .1758 to .1787, so just under .003 variation (vs. 007 to start).  The bottom is .1833 to .1796, or almost .004 variation.  To be honest, those measurements on the really thin portion of the trigger spring beam are really rough.  The beam is a little rolled over and the exact thickness I get depends on exactly where the micrometer sits.  Consequently, I don't trust the middle measurement on the bottom or the one to its left.

So with the frame the right thickness and the GB-22 still a steaming turd, what's next?  Is it time to disassemble everything and put it my scrap box?  I found and bought some stronger springs, but that didn't work back in June when I tried them.  I could try one again.   Otherwise, it seems like a total redesign might be in order.  If that's even remotely worth it.  Any other suggestions would be appreciated.