I'm just envisioning a lot of  people saying "what?"

The generic term 18650 refers to a battery that has become very popular in the last couple of years.  The leading 18 refers to the cell diameter and 65 refers to its length, both in millimeters.  I have no idea what the trailing 0 is supposed to mean.  They're quite a bit bigger than the familiar AA battery, and those dimensions show the 18650 to be very similar in size to what's referred to as 4/3A at 17x67 or 4/3 Fat A at 18x67.  (There are literally about 85 standard sizes for batteries other than AAA, AA, C and D cells).

There may be an exception, but every 18650 cell I've seen is a Lithium Ion battery and most tend to be higher current capacity than a AA rechargeable.  The picture gets more complicated from here.  I'll pick that topic up in few minutes.

If you have a tactical flashlight like a Streamlight, Ultrafire or some other brands, you may know about these batteries because they have become very widely used.  Likewise, they'll get used without your direct knowledge in things like the power banks available for charging your phone on the go.  For example, one like this, which based on its ratings and size, is probably a single 18650 cell with the required circuitry.  I believe they're at the heart of things like car jump starters I've talked about before, but their use in laptop battery packs is probably where industry first cranked up to make lots of these batteries.

I started down this road into 18650 land because of a battery powered light I found while looking for something else.  Not a flashlight, it's a bike headlight leftover from the days when the only time I could ride my bike this time of year was after dark.  (It's long since obsoleted by the manufacturer, but it resembles this one).  I found this light and a pair of batteries, long since forgotten.  Due to their shapes, I'll call them the bottle and the brick.  Both were Nickel Metal Hydride batteries, NiMH; the bottle measured more like 5 cells (over 7V open circuit after 16hours on a trickle charger) while the brick measured more like 4 cells (over 5-1/2V).   I believe the brick was the battery I used with this headlight while riding.

You would probably think it would be remarkable if they worked after years in storage.  I did, too.  After several discharge/recharge cycles, it turned out that the bottle would run the headlight for a while, while the brick wouldn't.  Neither was "good", but the bottle was better.  It's capacity curve looked very reasonable when supplying 1 amp, for over 2 hours.  When I say it's not "good", it's not like a new battery and can't be charged faster than a trickle rate for 16 hours. 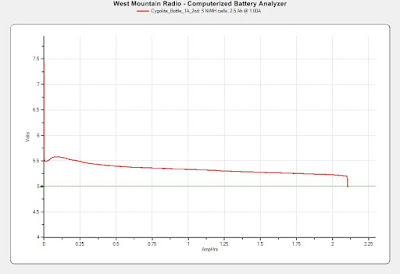 I had started to think that it would be nice to have this bright light available in the aftermath of a storm, or any other blackout.  Lights are always good.  After some effort, I was able to measure the current the headlight drew, which allowed me to size how big a battery pack I would need: it would have to be over 4V and rated one amp*hour for every hour I wanted it to run it at max brightness.  As a test, I ran the headlight for over two hours on maximum brightness from a pack of 4 AA NiMH Eneloop Pros that I borrowed from a handheld radio, just as my "1AH per hour" predicts.  That meant I knew I could just buy another pack of those, but I got interested in the capacity of the Li-Ion batteries.

A quick search of Amazon and eBay showed a bewildering assortment of 18650s.  Worse than bewildering, I would say a preposterous assortment.  One the one hand, you have reputable  companies like Samsung selling a 2500 mAH rated battery - identical to the smaller AA Eneloop batteries I tested - while on the other hand you'll find companies you've never heard of selling batteries rated almost four times that capacity.   I'm not a battery designer, but I understand what goes into them and how they work.  While it's true that in a given sized battery, current can be increased somewhat by increasing the surface area of the electrodes, the capacity in mAH depends most on the battery size.  As a result, I honestly don't believe anyone on earth can get 9800 mAH out of any 18650-sized battery, if the companies with a good reputation are claiming 2500 mAH.

Worse than ridiculous claims for batteries, the marketplace is also full of outright fraud, counterfeit batteries and counterfeit components.   After some looking around, I found a site dedicated to a niche use, home made battery packs for home made electric bikes.  That site ended up having lots of good solid information, including this gem:


Here is a video of disassembling an 18650 shell that has a very tiny 4.2V battery inside. Counterfeits are everywhere these days!

If you begin shopping for loose individual 18650 cells, and you find advertisements for 4200-mAh cells that put out 30A per cell…they are lying (Trustfire, Ultrafire, etc). An authentic Ultrafire cell is not horrible, but again, there are lots of counterfeits.

Buy some samples of the cell you think you want to use. Set-up a current-drain pulling the same watts that the cell is rated for, and…if it is too hot to hold in your hand after 5 minutes, its a fake. It may even look exactly like an authentic Samsung, Panasonic, or LG cell. Once you find a trusted vendor, only buy cells from them.

Using this guide, I narrowed my search to a few part numbers, eventually settling on Panasonic batteries rated for 10A surges and 3200 mAH, then found a seller on eBay with a decent package at a good price. 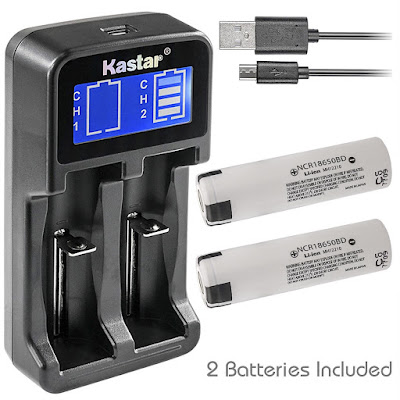