Another Blast From the Past

As the Democrat left keeps talking about the Green New Deal and Climate Change, it keeps reminding me of the times in the 10 years of this blog that I've posted about things that they just don't get right and just don't seem to understand.

They mean solar panels and wind turbines, maybe with some tidal power thrown in.  Why would anyone recommend wind turbines over nuclear when wind turbines kill incalculably more people than nuclear power?  Anyone who can look up some data online and run a calculator can show that renewables simply can't power the world.  It's not exactly secret it's just that it's hardly ever discussed openly.  In a rare exception, former Greenpeace president Patrick Moore had a wonderful Twitter response to everyone's favorite green twit, AOC, when she said “if you don't like my GreenNewDeal, put up your solution or STFU”: 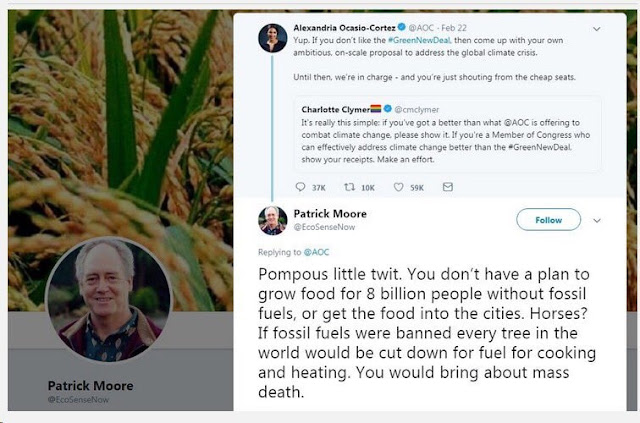 Mentioning horses bringing food to cities reminded me of one of my all time favorite posts, from June of 2010...

When Gasoline Saved the World From Pollution

I used to get a trade journal called "The Industrial Physicist", a free publication for qualified subscribers by the AIP, who publish Physics Today.  I will always remember a handful of concepts I first encountered in those journals.

The first one is that when gasoline powered automobiles first came out everyone thought they were saving the world from pollution.

Before the invention of the car, transportation was largely by horse. There are a few problems associated with horse transportation that we don't think of today.  Horses produce large amounts of horse manure and urine, and by the end of the 1800s, American cities were drowning in them.  Horses would die and be left in the road, obstructing traffic.  Flies and other vermin were omnipresent, spreading disease, and the stench was overwhelming.  When it rained, streets turned into almost knee-deep swamps of wet manure.  When it was dry, the manure dust would cloud the lungs of city residents.  One New Yorker in the 1890s calculated that by 1930 the horse droppings would rise to Manhattan's third-story windows.  In 1894, the Times of London estimated that by 1950 every street in the city would be buried nine feet deep in horse manure. No one knew what to do.  The horse had been the basis of human transportation forever.

Horses need to eat. According to one estimate each urban horse probably consumed on the order of 1.4 tons of oats and 2.4 tons of hay per year. One British farmer calculated that each horse consumed the product of five acres of land, a footprint which could have produced enough to feed six to eight people. Probably fifteen million acres were needed to feed the urban horse population at its zenith, an area about the size of West Virginia. Directly or indirectly, feeding the horse meant placing new land under cultivation, clearing it of its natural animal life and vegetation, and sometimes diverting water to irrigate it, with considerable negative effects on the natural ecosystem.  Horse food had to be transported to the cities, requiring extensive infrastructure to support the effort.  Trains ran on rails under steam power, but getting things to the trains and from them to their final destination required - you guessed it - horses.

And what goes in must come out.  Estimates were that each horse produced between fifteen and thirty pounds of manure per day. For New York and Brooklyn, which had a combined horse population of between 150,000 and 175,000 in 1880 (long before the horse population reached its peak), this meant that between three and four million pounds of manure were deposited on city streets and in city stables every day. Each horse also produced about a quart of urine daily*, which added up to around 40,000 gallons per day for New York and Brooklyn.  Vacant lots became piled high with manure; in New York these piles sometimes rose to forty and even sixty feet deep.

It was into this world that the miracle of the internal combustion-powered, gasoline-fueled automobile arrived.  In the span of two decades, the car eradicated a major urban nightmare that had strained governments to the breaking point, tormented the people, and brought society to the brink of despair.  Cities became much cleaner places.

Much of the content in this posting is credited to a link that apparently can no longer be accessed - as of March 1, 2020.


I've got to tell you, I'm finding it more entertaining than I thought to go through posts from nearly 10 year ago, as well as less old posts.