It Looks Like I Was Wrong About SpaceX Last Month

Back on July 15th, I posted that SpaceX is Apparently Having Falcon 9 Problems prompted by the several delays to Starlink mission V1 L9 (the somewhat puzzling name for the 10th Starlink launch is because the the first launch was a prototype version of the satellites, so it's the 10th launch but the 9th of the Revision 1 satellites). The reasoning was straightforward:


There have been eight announced launch dates for the Starlink 10 mission; I don't know if they consider all eight to be scrubs, but until now they've been going pretty much like clockwork, whenever the mission is scheduled. Maybe they scrub due to weather or some typical little problem, but they don't scrub eight times, spread over most of a month.

In addition to the eight missed launch dates, there were other oddities I mentioned in that post.

The mission launched this morning at 1:12 EDT and was flawless.  The booster landed on the drone ship OCISLY (Of Course I Still Love You), making B1051 the second Falcon 9 to take five flights and successfully land for reuse five times, opening the door to sixth and more missions.  This screen capture from the mission video replay captures the booster on OCISLY, with a little fuel still burning off the booster, while on the right, the second stage glows from the heat of its burn and is seconds from being turned off. 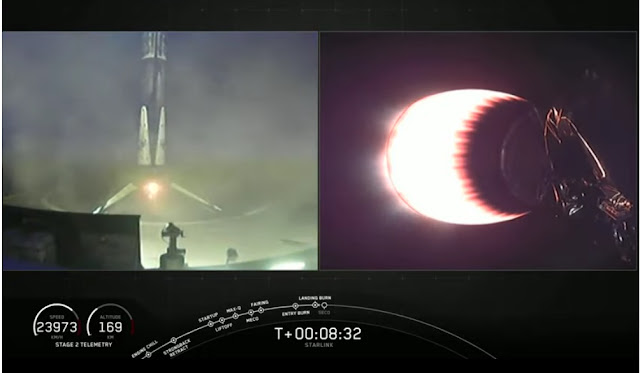 Tucked into that article on the Teslarati news site was this paragraph that brings an important bit of news.

While Starlink-9 was originally scheduled to launch as early as June 23rd, Principal Integration Engineer John Insprucker – a familiar fixture and voice on SpaceX webcasts – was quick to note that through the more than six subsequent weeks of delays, “Falcon 9 has been trouble-free.” He also partially answered the main question on everyone’s mind, noting that all of those delays could be traced back to bad weather and issues with the mission’s payloads.

While SpaceX wouldn't give more details (and nobody with any sense throws a customer under the bus), it stands to reason that the issues were probably related to the ride-sharing satellites from BlackSky on this mission.  After all, the previous nine flights that were (all but one flight) only Starlink satellites didn't have these issues.  The Ride Share satellites were pretty much last minute additions to the flight and it wouldn't be surprising if there were some sort compatibility issues between the satellites and the electronics they had to interface with.

Long time readers will know that when I go out and make a prediction about something that turns out wrong, I prefer to correct myself publicly (which means I have no possible future as a TV pundit).  I misconstrued a lot of little things lying around and came to the conclusion they must be having problems with the Falcon 9 system, booster or second stage.  I never thought the two BlackSky satellites might be the issue.