The Amazing Idiocy of the Post Office Conspiracy Theory

The year has kept up its feverish pace of every week handing me something that makes me shake my head and say, "what planet is this, anyway... and how did I get here?"

This week it's the idea that Orange Man Bad is trying to shut down the Post Office (instead of trying to rescue it, which seems to be something that's actually going on).  The evidence?  Mail trucks break down while mailboxes get locked overnight in some places and swapped out of service in other places.  The first thing I saw posted somewhere was this tweet form Performing Monkey Jamie Lee Curtis (can't call her a singing or dancing monkey): 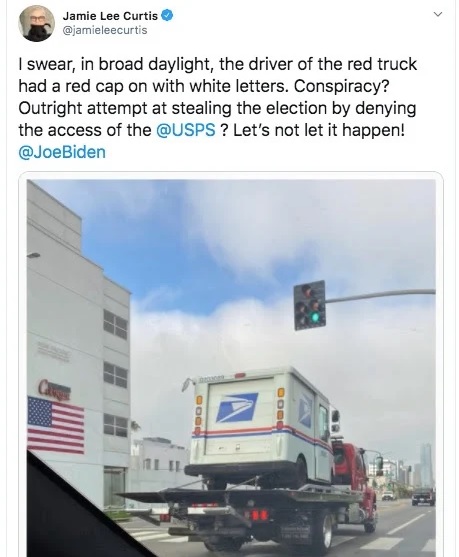 There's more than one example of stupid here.  The easiest one to poke fun at is her conclusion that because the driver of the red truck had a red hat with white letters, Trump's minions are engaged in an "outright attempt at stealing the election by denying access of the @USPS."

I probably don't need to say that I don't know Ms. Curtis, but I'm going to say the evidence says she's a moron.  Thankfully, she didn't say that the guy was wearing a MAGA hat, but he was wearing a red hat with white letters, which must be the same thing.  It would apparently never cross her tiny little mind that a tow truck with a red cab might just use red as their company colors and the driver might be wearing a uniform with matching red hat.  It also appears that JLC apparently thinks that mail trucks are some sort of Alien technology that makes them the only freakin' vehicles on the road in this country that don't break down and need to be towed!!!

Needless to say, JLC is not the only brain-damaged liberal in America.  This photo was also tweeted: 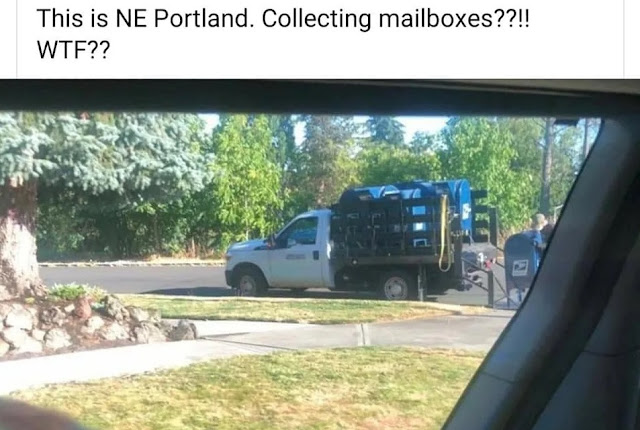 It blows my mind that there are grown-ass adults who don't realize that mailboxes might need routine maintenance.  It's like they believe mailboxes are the only things in the world made out of some miracle alloy that never rusts out or needs to be serviced.  It's alien technology again.

These aren't isolated examples, they're everywhere.  In one case, New Jersey Representative Mikie Sherrill tweeted a similar picture which saw more than 5,600 retweets, and she only later noted they were being replaced by newer mailboxes (which is pretty visible if you actually look at the original photo).  I'm sure you've seen other pictures.

Let me stop to note that Rep. Sherrill says in her Twitter "about me" box that she's a former Navy pilot and former Prosecutor, which certainly implies she's a lawyer.  Nothing about that background particularly screams "moron" - and doesn't even say she's a Democrat.  I always wonder when I see something that idiotic from a politician if they're really that stupid or if they just believe the people following them are so stupid they'll fall for it.

Anyway... there's lots going on here.  There's definitely an attempt to get people mad and outraged.  There's a layer that has to do with them really wanting access to millions of votes to control.  And there's a layer of union workers and Democrat politicians scratching each other's backs (as always).  Anyone who has worked in a union shop, especially a government union shop (cough, Kennedy Space Center contractors, cough) has seen situations where work just doesn't get done all week so they can come in and get it done for time and a half on Saturday.  The union and Democrats (but I repeat myself) don't like Trump's new Postmaster General appointee who's trying to unscrew the USPS.  If you want to read real background information there's the link up in the second paragraph, here's one to House Minority Leader Kevin McCarthy's article on Fox News.  Townhall's Kurt Schlicter writes that "The Post Office Conspiracy is First Class Stupidity."  Finally, Legal Insurrection asks, "Does Anyone Really Believe the Trump vs. USPS Hoax?"

Labels: big freakin' out of control government, commies and other idiots, UnionThugs