Just How Wrong Was The Population Bomb?

Just short of two years ago, I wrote a piece on the 50th anniversary of The Population Bomb.  The 1968 best seller was different from your typical apocalyptic stories; it was supposed to be serious science by an actual scientist Paul Ehrlich.  As I said at the time:

Doomsday prophesy sells, and doomsday from someone with a handful of letters after their name (MS, PhD etc.) sells even better.  The future didn't turn out quite as dismally as Ehrlich suggested; he famously lost a bet where he picked a "basket of commodities" and bet that these five metals would go up in price in 10 years (1980 to 1990) - they declined in price an average of 57.6% while the  population increased.  Nevertheless, he influenced a generation or two of policy makers.

Ehrlich didn't just stop with a prediction that a basket of metals would be more expensive in ten years, he said there would be mass starvation in the 1970s and humanity would die off soon thereafter.

Ehrlich prophesied that hundreds of millions would starve to death in the 1970s (and that 65 million of them would be Americans), that already-overpopulated India was doomed, and that most probably “England will not exist in the year 2000.”

In conclusion, Ehrlich warned that “sometime in the next 15 years, the end will come,” meaning “an utter breakdown of the capacity of the planet to support humanity.”

It's hard to be much more wrong than Ehrlich.  In contrast, University of Maryland economist Julian Simon published his book The Ultimate Resource in 1981.  He argued that humans were intelligent beings, capable of innovating their way out of shortages by many alternative means.

I think the history of the intervening years has shown that Simon was closer to right.  Despite the adamant desires of environmental alarmists, there has been no mass extinctions of humans, nor have there been “hamburger wars” for food.  People have innovated our way out of scarcities.

Marian L. Tupy is the editor of HumanProgress.org and a senior policy analyst at the Center for Global Liberty and Prosperity.  Together with Brigham Young University economics professor Gale Pooley, the two of them analyzed the two time periods, 1980 and 2017 (hat tip to FEE).

In “The Simon Abundance Index: A New Way to Measure Availability of Resources,” we look at prices of 50 foundational commodities covering energy, food, materials, and metals. Our findings confirm Simon’s thesis. Between 1980 and 2017, the world’s population increased from 4.46 to 7.55 billion or 69 percent. Yet, resources have become substantially more abundant.

It's almost as if each and every soul born in those 37 years came with some of the resources to support them.   Anybody who has witnessed (or given!) a birth or two can assure you none of the newborns come with supplies for all their needs, so that's not how it happened.  It came about by the diligent efforts of individuals around the globe creating human progress.

Ehrlich and Simon looked at inflation-adjusted prices of commodities. By our count, those fell by 36 percent. Taking that analysis a step further, we have come up with a “time-price” of commodities, which allows us to cost resources in terms of human labor. We find that relative to the average global hourly income, commodity prices fell by 64.7 percent between 1980 and 2017.

Second, the price elasticity of population (PEP) allows us to measure sensitivity of resource availability to population growth. We find that the time-price of commodities declined by 0.934 percent for every 1 percent increase in the world’s population. Put differently, over the last 37 years, every additional human being born on our planet appears to have made resources proportionately more plentiful for the rest of us.

Third, we develop the Simon Abundance Framework, which uses the PEP values to distinguish between different degrees of resource abundance, from decreasing abundance at the one end to super abundance at the other end. Considering that the time-price of commodities decreased at a faster proportional rate than population increased, we find that humanity is experiencing superabundance.

Finally, we create the Simon Abundance Index (SAI), which uses the time-price of commodities and change in global population to estimate overall resource abundance. The SAI represents the ratio of the change in population over the change in the time-price, times 100. It has a base year of 1980 and a base value of 100. Between 1980 and 2017, resource availability increased at a compounded annual growth rate of 4.32 percent. That means that the Earth was 379.6 percent more plentiful in 2017 than it was in 1980.  [Note: all bold added - SiG]

This post struck a chord with me because I've been reading Apocalypse Never by Michael Shellenberger.  Shellenberger was a celebrated environmentalist until he started saying the conventional green approach was hurting more than it helped.  For example, he started saying we couldn't possibly meet "green energy" needs without nuclear power.  In Apocalypse Never, he argues that the overreaction to climate change is causing damage, and while "climate change" might be a real problem, it's far from our biggest.  I'm only a quarter through the book and already in the first few chapters he's blown away some of the most common stories you hear, from the Amazon burning last year to plastic straws to the threats to gorillas in the Congo.  Time after time he shows how the first world's environmentalists are the problem.  I had intended to provide more detail in "book review" as I've done a few times, but I'll finish the book first. 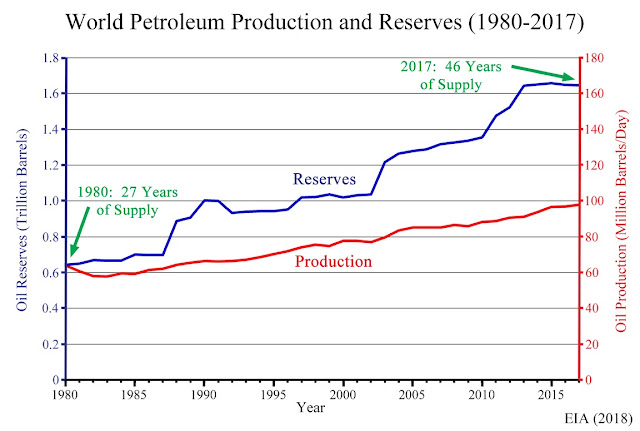 The myth of peak oil in one plot.  In 1980 we had only 27 years worth of oil left; 37 year later in 2017 instead of being without oil for a decade, we were down to only 46 years worth of oil left.  Say what?  One guy who has studied the Permian Basin in the Southwest US says it's totally reasonable to consider it a permanent source.  Essentially infinite.  Of course, what happened was that new techniques were developed to get oil out of the ground and that increased the amount that was recoverable.  All because the free market was allowed to function properly.