Let Me Be The First to Call Florida's Covid Outbreak Ending

With the disclaimer that I don't read enough other people to know if I'm the 900th to call it.  Probably not, though.

I base this on a few numbers from the Florida state Department of Health.  I think the overall argument is easy to see.  Every single stat that I can get from the web site (and I'd like a lot more stats than I can get) is getting better.  This is the overall picture. 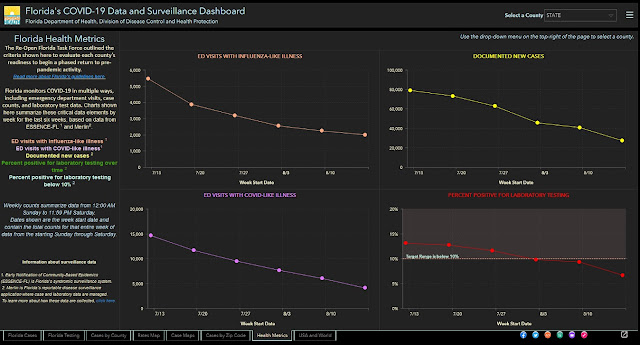 The time scale is different in the next plots, but the numbers are both moving in the right direction.  The two plots don't show the same sample; deaths seem to be from two weeks to months behind when a new case presents to the system, but the important characteristic is that deaths are declining rapidly. 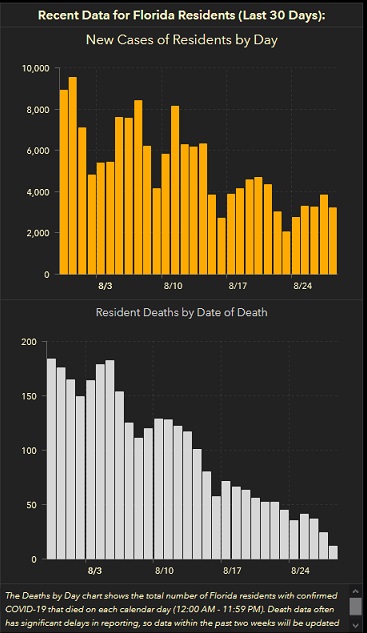 The best read on this I've seen lately is one Irish posted several days ago - Lockdown Lunacy 3.0 - it's over on JB Handley's blog, but all the numbers in Florida are all pointed in the right direction.  Handley goes into Edgar Hope-Simpson's important work on influenza and seasonal patterns, which explain why the numbers in the northern tier of states were highest early in the year, and peaked later in the year in the southern tier.  The media made an enormous fuss over this trend, but it's what viruses do.  Irish biochemist Ivor Cummins gives a clear explanation of the seasonality in this short video.  Handley embeds the same video.

Of course, lots has been learned in the last few months, both in our treatments of the virus and the knowledge of the virus itself.  Among the most interesting to me is the discovery that our T-cell immunity seems to be conveying immunity to this virus in most people.  That implies this coronavirus is genetically similar enough to other coronaviruses (mostly colds) we've been exposed to in our lifetimes.  That drastically drops the number of infections to achieve herd immunity to around the number of cases there have been.  The utter uselessness of the harsh lockdowns is interesting but not "new".  While that linked post is two months old, every study since then has reached the same conclusion.

I also find it interesting that children apparently get the virus but don't spread it (more in Handley's post) and that so-called "super spreader" events have only occurred indoors.  One or two have occurred in events that had an indoor and outdoor component, but none are documented in outdoor events.