Although there haven't been any definite announcements of upcoming tests, I've been tuning into either the LabPadre live video feed or NASA Spaceflight's updates since SN5 flew last week.  Over the weekend, we watched SN5 get lifted by crane onto a new stand for work on its legs.  A couple of the legs crushed due to the vehicle's weight not being evenly distributed on the legs, leaving the vehicle with a noticeable angle to the vertical. 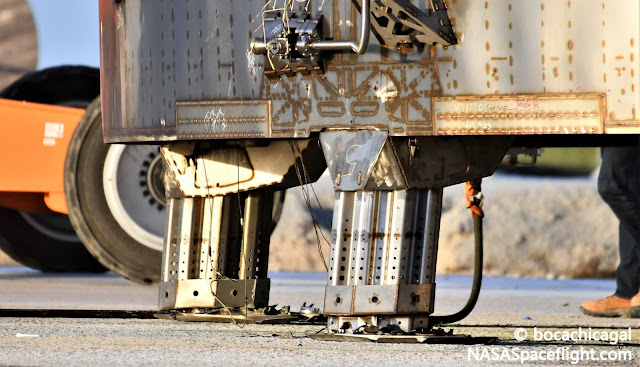 The crushed legs on SN5; those are designed to have a crush zone in case of this sort of landing.

The news picked up today, presumably because it's Monday and more of the writers covering this are back at work.  Today, Teslarati reports that

Over the last several days, SpaceX has gradually been working through the unprecedented task of inspecting, safing, and relocating a flight-proven Starship. At the same time, the company has to check out the fixed launch mount structure that supported the test flight and provided Starship with power, propellant, and wired communications. As teams work to get both ship and mount ready for round two, CEO Elon Musk has taken to Twitter to discuss some of SpaceX’s nearer-term goals and plans for Starship testing – including SN5’s role in them.

Not sure yet, but hopefully. Will need leg & other repairs. Probably SN6 flies before SN5. We need to make flights simple & easy — many per day.  — Elon Musk (@elonmusk) August 8, 2020

“... make flights simple & easy — many per day” is no small task, yet it's completely in keeping with what we know about Musk's dream for Starship.  The model of commercial aircraft is cited often; the goal is to make launches happen routinely, with less schedule slip due to weather.  For one reason, if they need to send a fleet of Starships to Mars, they need to fly with extreme reliability.  In the past, SpaceX has talked about using Starship as a rapid flight service as supplement to airline travel.  Transoceanic flights in minutes instead of hours. This suggests the next several months could be full of Starship hops.

But getting back to SN5 and when it will fly again; nothing definitive has been said.

Musk also noted that Starship SN6 – a prototype built alongside SN5 and effectively completed weeks ago – would likely attempt its first flight before SN5 hops a second time. SpaceX began stacking the upgraded Starship SN8 prototype just a few days ago, raising the question of whether Starship SN6 would be made redundant before it even left the factory. [Minor edits for readability - SiG] 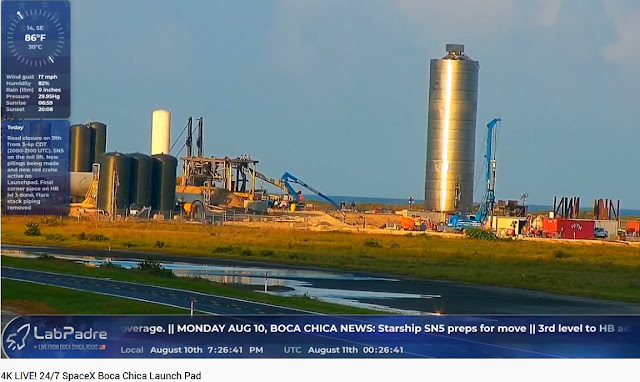 Screen capture from an hour ago.  In this case, SN5 is vertical; if you look at the horizon, you can see the camera is tilted.  Much work is being done on the launch platform, left of center, and SN5 has been moved most of the way back to that platform.