A few weeks ago when I talked about what I see as the fundamentals of RF engineering, I listed both of these and today I lump them together because they overlap so much in application.  An overworn saying in engineering is that “everything is a filter” in the sense that everything from a straight wire to any circuit you can imagine has an amplitude vs. frequency response that’s not flat (that is, the circuit doesn’t pass all frequencies equally).  Impedance matching circuits generally don’t have flat frequency response. 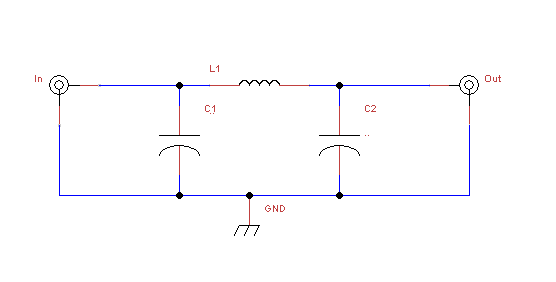 Bandpass filters are more complex and come in different arrangements of parts (different topologies) depending on the percentage of the center frequency that they pass, often referred to as filter Q, defined as center frequency fo divided by bandwidth.  Usually written as

If the value of Q is 10 or higher, filters are often designed as parallel resonant circuits coupled together.  A two element narrowband bandpass filter looks like this:

The capacitors labeled Cm1 and Cm2 are impedance matching capacitors.  The designed (“native”) impedance of the filter is ordinarily nothing close to what you need and is typically quite a bit higher than your circuit.  The filter algorithm starts with the requirements for bandwidth and center frequency and you choose the inductor for the resonant circuits.   You’ll notice I called both coils L1 and both resonating caps C1; in two element filter like this, they’re typically identical.   The coupling capacitor, Ccpl, is ordinarily rather small, and I can’t recall one I designed where that wasn’t the smallest capacitor in the filter.

If you’ve worked with cavity filters, they look like this schematically.

By contrast, if Q is less than 10 it’s considered a wide bandwidth BPF and the algorithms for design are different than the narrowband filter.  The wideband BPF is designed by first designing a lowpass filter and then resonating each of the elements in the filter.

Filters have been designed differently over the years, and many methods remain.  In the early days of computer aided design, a new method called Modern Network Design came into being, in which everything can be designed from tables of prototype filters normalized to a cutoff frequency of 1 (radian per second, not cycle per second).  What the designer needs to do to select the filter type and complexity (how many parts it needs) and then convert the component values in the table to the frequency and impedance they need.  I started with that type of design and have stayed with it for my entire career.  It’s an extremely computerizable technique.

Some of you might know that three element networks like the sample LPF and HPF above are sometimes called Pi networks, because the arrangement reminds people of the Greek letter Pi.  It’s also possible to implement these networks as a “T” network because it looks like... well, you know.

Note that this is a lowpass because it has two series inductors and will pass DC.  The Pi and T forms are called duals of each other.

As a general rule, while there are two ways of designing the same lowpass filter, inductors tend to be bigger, more expensive and higher loss than capacitors, so the format I showed first is most commonly used.  That said, there can be other reasons to choose the T over the Pi; the most likely would be that you have the coil values you need for the T on hand while the value needed for the Pi would need to be ordered.

What if you want a filter to match between two impedances?  While the standard filter tables have different input and output impedances, you don’t have total control of the ratios.  It might be useful to know that any filter with an odd-number of elements can be made to match different input and output impedances by dividing it into two portions at the middle of middle element and denormalizing one end to new impedance.