NASA Just Snuck Out a Revised Cost Estimate on SLS

"Already within my short time on the job, NASA is checking-off key milestones and marching swiftly toward Artemis I," wrote Kathy Lueders, who moved into the job after leading the Commercial Crew program. "That mission, the first uncrewed flight test of our powerful Space Launch System rocket and Orion spacecraft, is just a little more than a year away from launch."

Lueders next discussed preparations for a "Green Run" test of the SLS rocket's core stage this fall, possibly by the end of October. ...

After discussing this and other details, Lueders then rather casually let it slip that, "NASA also aligned the development costs for the SLS and Exploration Ground Systems programs through Artemis I and established new cost commitments." The new development cost for SLS rocket is $9.1 billion, she said, and its budget for the initial ground systems to support the mission is now $2.4 billion.

It was only a few weeks ago when we found that each of the four main engines of the SLS would cost $146 Million a piece, or just shy of $600 million for the engines - not counting anything else on the rocket.  These are the same hardware design as the Space Shuttle Main Engines, designed as reusable engines.  At the end of each flight that $600 million will be tossed into the Atlantic.  As I pointed out in that May post,

Not that a Raptor could directly replace an SSME.  It would require redesign of the system.

What are the chances that the November '21 SLS flight will happen?  It's hard to know.  Certainly the major obstacle to be cleared is the "Green Run" test firing, but there have also been Covid-19 delays.  The Green Run, at Stennis Space Center in Mississippi, will be the first test of the entire hardware and "plumbing" system of SLS which will run the system for over eight minutes, the amount of time required for a mission.

You might say, "What's the big deal?  These are Space Shuttle Main Engines; they're as well known as any engine that has ever flown, if not better.  All that SLS did was design in four instead of three and add some plumbing."  We can be sure both NASA and the contractors have simulated everything that can be simulated.  Unfortunately, that may not be enough.  As Berger points out:

Engineers familiar with testing large, complex systems for the first time say there is a low probability of a perfect test or a major structural failure. However, the highest probability is that NASA and Boeing discover some problems that will at least require several months to address before the core stage is deemed ready for launch.

It's not easy to correlate their simulation vs. reality experiences with the experiences I had in a completely different world.  I suspect the big picture is the same though: by this time, they've ruled out major failures that would blow up the booster on the test stand, but it may still be possible that they need to do design "tweaks" to get the system to work as desired.  If that "highest probability" outcome of having to do some redesign is what happens, the odds of a launch before the end of '21 drop to zero. 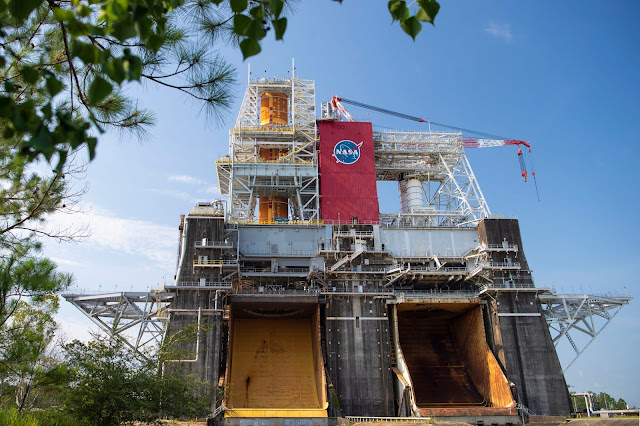 Posted by SiGraybeard at 5:12 PM