California Assembly Bill 5 from 2019, introduced here back in January, was carefully crafted to destroy freelance jobs and make them employees of the central company they work for.  It was said at the time that the target was those two gig economy leaders, Uber and Lyft, but my emphasis was for the unintended consequence of freelance writers.  What can I say?  I've had a handful of magazine articles published over the years, but never went fully freelance.  Which is saying I never went part time full time.

Both Uber and Lyft had announced they would be shutting down operations this week by midnight yesterday, but they won a temporary reprieve from the California Court of Appeal.  This gives them until October, less than six weeks, to put together a case that will allow them to continue their current employment arrangement.  If it's even possible to convince the state it was wrong in passing AB5.

Uber and Lyft are under enormous pressure to fundamentally alter their business models in California, the state where both companies were founded and raised billions of dollars in venture capital. Uber and Lyft say drivers prefer the flexibility of working as freelancers, while labor unions and elected officials contend this deprives them of traditional benefits like health insurance and workers’ compensation.

I don't doubt for a femtosecond that there are likely to be drivers who would prefer to be freelancers, and drive whenever they have some free time; or maybe need some extra income for something.  My gut feel, however, is that more drivers would prefer it to be more like a full time job, and the less actual work the better.  Something that required a bit less initiative.  I only know a couple of people who drive for Uber and in both cases it's "until something better comes along."

What I didn't know about the situation is that both Uber and Lyft are losing money.  They're nonprofit corporations, in everything but the all important tax status.  According to an article at the Foundation for Economic Education (FEE):

Their entire business model was based upon independent contracting, so providing full employee benefits is prohibitively expensive. Neither Uber nor Lyft actually make a profit, and converting their workforce to full-time employees would cost approximately $3,625 per driver in California. As reported by Quartz, “that’s enough to boost Uber’s annual operating loss by more than $500 million and Lyft’s by $290 million.”

Essentially, California legislators put these companies in an impossible position. A company can't lose money indefinitely.  Between the two of them, the companies employ 220,000 people in California alone (140,000 at Uber); if they lose the October court judgement, instead of making these 220,000 people employees with all benefits, they will make these people unemployed.

I like to point out an acronym I came up with: TANSTAALWUC.  There Ain't No Such Thing As A Law Without Unintended Consequences.  The problem with invoking that is I don't think it's unintended.  The taxi driver unions got a law passed to kick competition out of the state.  It's fully intended.

The “rest of the story” is that an October loss by Uber and Lyft might not end things.

Uber and Lyft, along with DoorDash, were successful in getting a proposition on the state’s 2020 ballot that, if approved, would allow it to sidestep AB5 and continue classifying its drivers as independent contractors. The measure, Proposition 22, also stipulates that the companies provide more benefits to drivers, such as a minimum wage and access to health insurance. Unions and other pro-AB5 groups argue these benefits fall short of what drivers would be entitled to as employees.

In the gonzo, totally insane, illogical world of California, you never know what you'll find next. 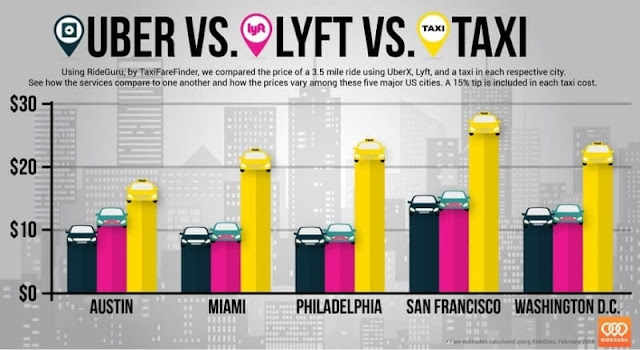 (Kind of old but probably similar to today's situation - source)