Well, That Was a Giant Nothing Burger

A giant Nothing Burger with a side of Nothing.  We got two light sprinkles of rain and nothing beyond a pleasant breeze.  As late as the 2PM update, the local NOAA site gave a plot of expected winds that had the same basic shape as yesterday's plot only weaker by about 20mph  The 5PM update just gives a constant breeze of 23mph gusting 30 overnight.

I'm not sure I remember a bigger fumble of a storm forecast.  I shouldn't complain - it does come with 50% less pain in the ass than if they got it right.  I have to take down my few shutters, but at least I don't have to clean up all the crap I do after hurricanes.

On the positive side, it gave me time to sit around and watch the return of Doug and Bob from the ISS and the completion of the Crew Dragon Demo-2 mission with what looked like a completely nominal reentry and splashdown. 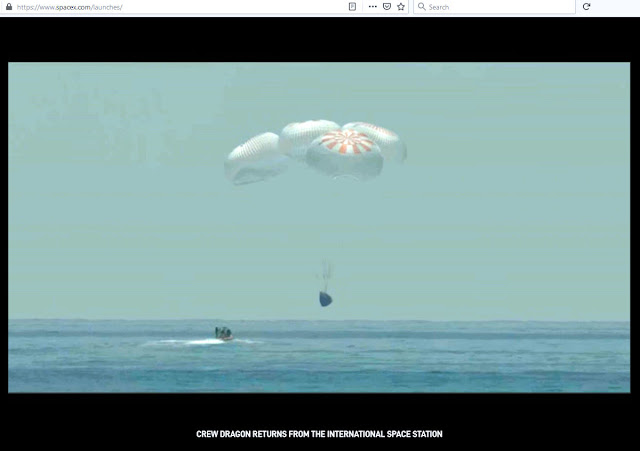 I watched the coverage on SpaceX's site (that link will change to another mission in a couple of days).   About an hour before the splashdown, they were showing SpaceX mission control in California.  Suddenly a guy in the front row caught my attention.  He looked vaguely familiar.  Then I noticed the blonde woman he was sitting next to.  One of the voices in my head said, "that's Musk and Gwynne Shotwell."  (For those who don't know, Gwynne Shotwell is the President and COO of SpaceX; Musk is CEO and Chief Engineer). They were announced a bit later in the coverage.  Shown circled in this screen capture from YouTube just now. 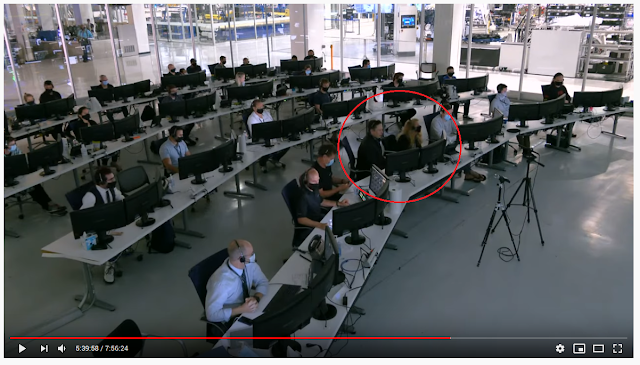 During reentry, there's a period where the superheated plasma around the spacecraft wipes out radio communication.  It lasts several minutes and although anyone who has watched space missions a lot has gone through bunches of these blackouts, they're always been a pucker moment.  When the ground controllers called the capsule the first time, the crew didn't reply.  The announcer calmly said, sometimes they get some little bits of data down from the ship before it's out of the blackout.  About thirty seconds later, the ground calls, "Dragon, Spacex.  Comm check."  Doug Hurley responds and you can see Gwynne Shotwell visibly relieved to hear them.  Right around the 6:21:00 mark in that video.

Once the dragon capsule was in the water a little while and while the SpaceX guys were readying it to be pulled onto the recovery ship, they were suddenly joined by a flotilla of fishing boats.  A couple were flying American flags and at least one a Trump banner.  They were asked to stand back and they all formed a circle a hundred yards or so away.  It was interesting to watch because I could imagine being well offshore and seeing a capsule coming down under four big parachutes.  I think I'd have to leave the fishing spot and check it out, too.  Around 6:50 and a few minutes after that.