A Deeper Look at That Poll Everyone is Talking About

In the last few days, several of my everyday reads talked about a University of Virginia Center for Politics poll that has been quoted from widely.  This is the poll that gets the national press with the pull quote that conservatives feel it's time for a "national divorce."  Some places just outright say that conservatives want civil war (John Wilder presents two images taken from the Daily Mail and Atlantic magazine).  That's not what the poll says, at least as I read it.

Before I can really talk about what it says, I need to go into how the poll is structured and the answers displayed.  From the UVA site:

Scoring the responses is a bit involved.  The description of how the participants scored their reactions to the questions is here (also from the poll website):

For the statements listed in [this document - edit by SiG], respondents were asked how much they agreed or disagreed with the statement on a 0-100 point scale (0 was categorized as disagreeing completely, 1-25 means strongly disagreeing, 26-50 was disagreeing somewhat, 51-75 was agreeing somewhat, 76-99 was strongly agreeing, and 100 was agreeing completely). So the percentage of people who at least somewhat agreed with the statement selected 51 or above on the scale for the given statement, and the percentage of those who at least strongly agreed selected 76 or above.

The way the results are shown, then, is there are three tables which they group by their perspectives of how the questions go together.   For example they take the statement “I have come to view elected officials from the [OPPOSITION PARTY] party as presenting a clear and present danger to American democracy.”  is in the left column of the table.  Then the answers are presented as “somewhat agree / strongly agree” with Biden voters in the middle column and Trump voters on the end.  In this example the answers were:  Biden voters said 80% / 51% while Trump voters said 84% / 57%.

Note that the first (somewhat agree) percentages are 4 points apart.  Those should both be read as + 2.2%.  The high side of 80% with that, 82.2% overlaps with the low side of 84 at 81.8%  Both of their stated numbers are consistent with a result of 82%, which says that we really can't know those numbers are different.  They both could be 82%.  The "strongly agree" numbers (51% Biden vs. 57% Trump) are a bit farther apart, but not too far from both being 54% + 2.2%.  The difference is we can tell those results are different.  Both parties are strongly agreeing that the other guys are “a clear and present danger to American democracy.”

Table 1 concerns items in the big Infrastructure Spending bill we hear about endlessly. 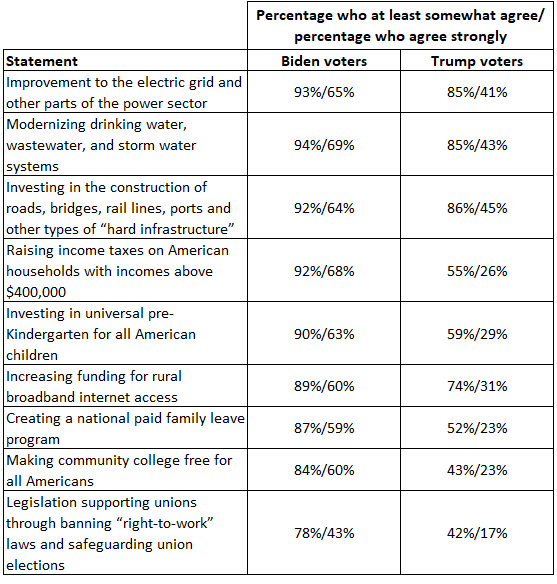 There are some items with large differences, but what struck me was how large the Somewhat Support numbers for Trump voters were on all of them.  Over 80% of responses were somewhat supporting improvements to the electric grid, "modernizing" drinking water, wastewater and storm water systems and then "hard infrastructure" of roads, rail lines, ports, bridges and such.  A big government program of "universal pre-Kindergarten" got virtually 60% support.  There was 74% support for funding rural broadband internet.   All of these Trump voters had some support for these big-government, Democrat programs.

While it's true Biden voters strongly supported all of these more than Trump voters, these Trump voters don't seem to be fiscal conservatives at all.  They're only slightly closer to ambivalent on "tax the rich" ideas.  The only ideas they don't support are "free" (taxpayer funded) community college and allowing unions to ban right-to-work laws.

Table 2 is an attempt to measure fear and distrust of the other guys. 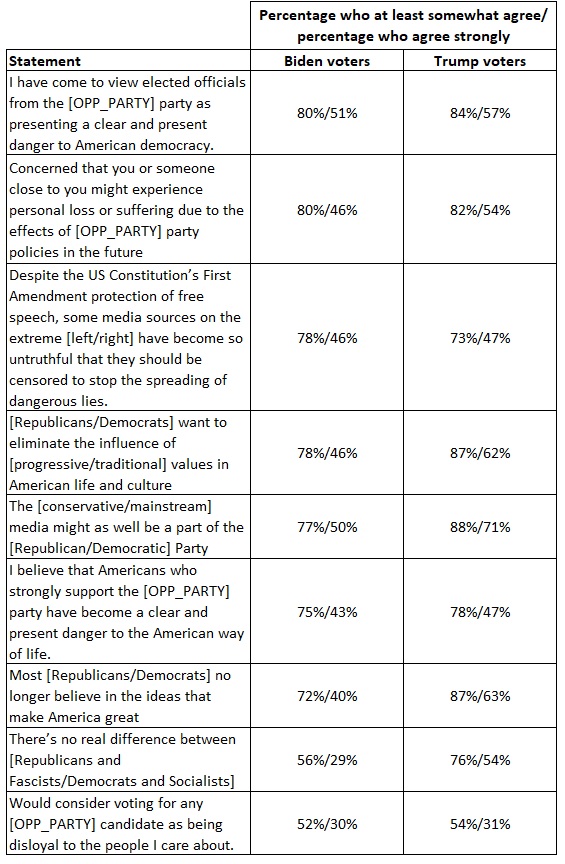 Some of this was also surprising to me.  While we see tons of leftists on Twitter or other social media acting like they want to kill off all Trump supporters, Trump voters view the elected Democrat officials as more of a clear and present danger to the Republic than the way Biden voters view elected Republicans.  Then again, the way the elected Republicans vote, for the most part, says Biden voters are probably right thinking that the Republicans are not a threat.

Finally, Table 3 contains the line everyone's talking about.  It's supposed to be determining the commitment to democracy of both groups. 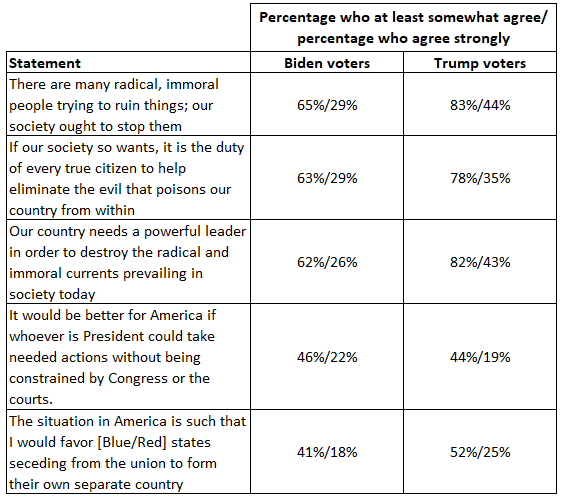 Both sides think the other side is "radical, immoral" with Trump supporters thinking that more strongly, and both sides think it's the duty of "every true citizen to help eliminate the evil" afflicting the US.  Again, Trump voters more strongly agree.

The next two surprised and disappointed me. Both groups said we should have a stronger President, both sides had 45% "somewhat support" of the idea that it would be better if the president could do more without having to deal with congress or the courts.  That's another example of both groups being almost identical.

82% of Trump voters somewhat support a stronger president.  That got 62% of Biden voters' somewhat support.  Both this and the previous question imply changing or getting rid of the constitutional balance of powers .

Finally, the one everyone is jumping on, only 25% of Trump voters strongly support the Red/Blue states seceding from the union, which isn't much, but a smaller percentage of Biden voters say the same thing.  Because it's more than 50%, the somewhat support number of Trump voters caught everyone's attention, but "somewhat" supporting secession is a long way from working for it to happen.  It's the difference between saying, "someone ought to do something" and stepping up to do it yourself.


If it's not clear, I see this poll as showing the two groups as more similar than different.