All The Same Old Lies and BS

As we go through the kabuki theater of another "debt ceiling crisis" the same old tropes are showing up all over again.  Same old lies.  Same old bullshit.  Same old charade, drama-llama, attention-grabbing, media whore-fest as always.

I've been hearing them saying that not raising the debt ceiling means the US is going into default.  Check your favorite corporate media outlet (CNN?  NY Times?).  Pick one; all of them are running stories about looming default.  It's an old lie.  Some cursory searching shows the first time I blogged this was in July of 2011, about a 1-1/2 years into the life of the blog.

No it's not default.  By definition, the debt ceiling means they're not allowed to borrow more money.  They're not allowed to issue bonds and spend more than the insane amounts they've made up already.  Read that again: it's not even a balanced budget, it just can't be more unbalanced than it is now.  Not being able to borrow is not default   Default is to not pay their mandatory payments and among the most important of those obligations is the interest on the debt they already have.  That interest, estimated as $300 billion, is a small percentage of Federal revenues, on the order of 10%.

Only a government can be stupid enough to think that not being able to borrow means ignoring their obligations.  Rather than default, this would be better called "living within their means" or "being responsible."  We won't default unless the administration chooses to.

You'll also hear them talking about a tough, temporary deal to put off facing the debt ceiling and (gasp!) shutting down the government.  There's a cartoon I've been running for years, almost every reference to the debt ceiling, that I really think sums up the whole story. 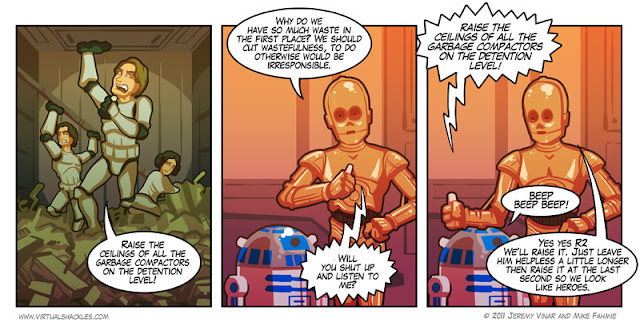 Yup.  They drag it out as long as they want, make it sound as dire as possible, all so that they can look like heroes, as in the last panel.  I went to the credit, in the lower left of the cartoon and the web site appears to be gone, with just a place holder there.

Let's be honest about this.  The other way of saying "government shutdown" is "paid vacation" for the lucky Fed.gov 's nonessential workers.  The longest government shutdown ever was 35 days between December of '18 and January of '19, under President Trump.  The essential workers had to work without pay until the deal was made and their pay could be issued and that must have been tough.  The result, though, was that while they suspended the ceiling, the debt kept going up (see below).

The biggest lie, however, is that there's really a debt ceiling at all.  There hasn't been one time since the debt ceiling became law in 1917 that the ceiling has been reduced.  It's either raised, or suspended - which pretty much means ignored - every time the limit seems like a hard limit.  If every time the ceiling becomes a restraint the ceiling is raised or ignored, how can they claim to have a ceiling?  Does it create even the smallest amount of restraint of spending in the congress?

It took me an unusually long time to find a plot of the debt ceiling this time. 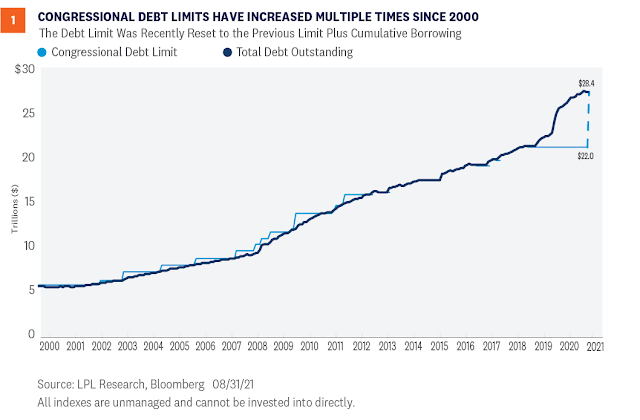 I was only able to find two graphs of the debt vs time.  This one (from Sherman research) goes farther back and does a better job of showing the congressional debt ceilings as blue steps.  That difference at the right, where the blue line stays at $22 trillion while debt goes up to $28.4 trillion is the deal from the end of the second Trump shutdown until this year.