Every so often, you come across a story so unusual, so different from all the other stories, that you just have to pass it on. It's even more unusual when the story revolves around spaceflight, or, at least, spaceflight hardware.   This week's Rocket Report from Ars Technica included this story, by their space correspondent Eric Berger.

Most people know the former Soviet Union created a duplicate of the American Space Shuttle called Buran.  The first Buran shuttle made just a single, unmanned flight to orbit in 1988. However, Buran was destroyed in 2002 after the roof of the hangar where it was stored at the Baikonur cosmodrome in Kazakhstan collapsed. 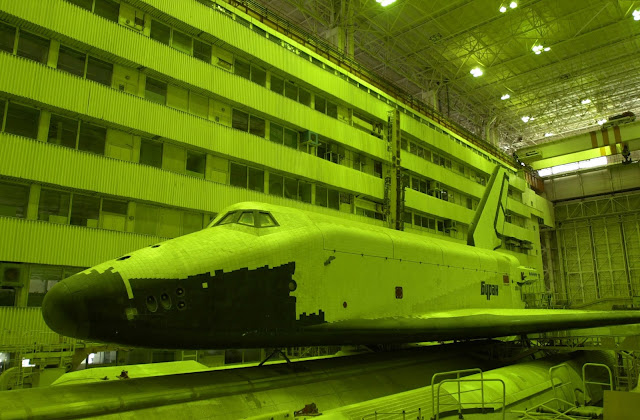 The Buran shuttle at Baikonur at some unspecified time between 1988 and 2002.  Scott Peterson/Liaison photo from Getty Images and Ars Technica.  I seriously wanted to correct the color in this but decided, by the white lights in a few places, that this is probably close to how it looked to the naked eye.

What most people don't know is that they built a second vehicle of the same size called Burya.  A duplicate.

This was the second orbiter built as part of the Soviet Buran program, which aimed to produce a fleet of space shuttle-like vehicles four decades ago. At the time of the program's cancellation in 1993 due to a lack of funding, the Burya vehicle was deemed to be more than 95 percent completed for flight operations.

The one that flew was Buran 1.01, while Burya was Buran 1.02.  Parts of other Buran orbiters were built and largely scrapped in the 1990s.  Through a convoluted series of events, a Kazakh businessman named Dauren Musa has apparently acquired Burya.  Burya is stored in another building at the Baikonur cosmodrone in Kazakhstan, and was vandalized pretty badly by graffiti "artists." 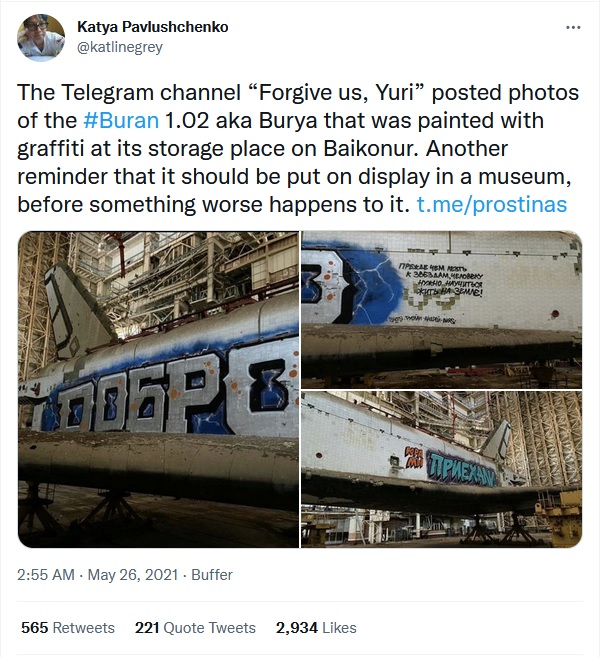 Kind of peculiar already, but nothing really extremely weird, right?  Hang on.

Roscosmos, the Russian state corporation that pretty much runs the Russian space program, wants to preserve Burya as one of the few pieces left of a big, impressive program they completed.  They want it in Russia where they have the facilities to restore and display Burya.

Musa, however, does not simply want to give the vehicle back to Russia. In September, reports emerged that he would only return Burya to Russia in exchange for the skull of the last Kazakh Khan, a man named Kenesary Kasymov. He has emerged as a hero in modern-day Kazakhstan for leading a 10-year struggle opposing the Russian Empire's attempts to colonize the region during the 1840s. A rival ultimately beheaded Kenesary Kasymov in 1847 and sent his head to Russia.

Now, Musa wants the skull back, and he is willing to trade Burya for it. In an interview published Friday in a Russian language newspaper in Kazakhstan, Musa escalated his rhetoric. He said he would definitely not allow the shuttle to be returned to Russia for nothing, emphasizing the value of Burya as a bargaining chip by noting that it is the most valuable Russian artifact in Kazakhstan. He emphasized his determination, saying, "It is not water that flows in our veins, but blood, and it has the scent of wormwood." Wormwood is a common plant in Kazakhstan and a key ingredient of absinthe.

The complication is that Russia may not have the skull of Kenesary Kasymov that Musa is pressuring them for.   Russian officials say they don't know where it is.

The prime contractor for the Buran program was a company called RSS Energia, the biggest contractor for the Russian space program. According to NASASpaceflight.com, a subsidiary of Energia was created to manage its properties at Baikonur. In 2004, this company transferred the two Buran vehicles to RSE Infrakos, which in turn turned them over to the Russian-Kazakh company JSC KRISP Aelita. In 2011, Musa bought the company’s shares. He renamed the company RSC Baikonur.

The ownership of Burya remains somewhat in doubt, however. Kazakhstan government officials have asserted their ownership of the assets of RSC Baikonur. The matter is being litigated in court in Kazakhstan.

In an interview published Friday, Musa said these court proceedings have been dragging on for three years.  He asserts he owns Burya, while the Kazakhstan government asserts they do.  Any trade of a never-flown space shuttle copy for a 174 year old skull, which no one seems to know the exact location of, will have to wait.