Do You Need Proof They're Following Modern Monetary Theory?

Thanks to Francis Porretto at Liberty's Torch, there's no need to speculate that the Evil Party has fallen completely for Modern Monetary Theory.  Francis links to Breitbart, with this summary:

On Thursday’s broadcast of CNN’s “OutFront,” House Budget Committee Chairman John Yarmuth (D-KY) said that $3.5 trillion in spending under the reconciliation bill “is pretty inconsequential when you consider all the benefits to the American people,” and “The federal government can afford anything that it feels it needs to do.”

Yarmuth said Sen. Joe Manchin (D-WV) “has no understanding of how the federal government monetary system works. When he compared it yesterday to his household income, that has no relevance to what we can do. It’s not a question of what we can afford. The federal government can afford anything that it feels it needs to do. And right now, that’s what we ought to be focused on.”

Francis also includes a 32 second long video that you might want to watch (either at his place or here) but that's the complete transcript of what the congress critter said.

The words to focus on the are the two sentences before the last one: “It’s not a question of what we can afford. The federal government can afford anything that it feels it needs to do.”  [Bold added: SiG]  That's almost the definition of MMT.  In the very first post I wrote on MMT, back in January of '19, I borrowed a quote that later turned out to be a common MMT refrain.  The quote was that football referees can't run out of points, with the implication that therefore the government can't run out of money.  No, they never really explained the connection.  MMT theorists say: 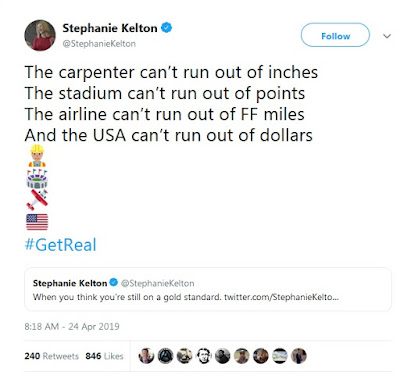 Because the first three of those statements refer to things that aren't real, the hidden message is that dollars aren't real.  To me, this tweet raises the perpetual question of, "are they really that stupid or do they just think we are?"


Bill Mitchell, an Australian economist, is supposed to be the creator of MMT, but the name we see in the most in the US is that Dr. Stephanie Kelton, who was Bernie Sanders' senior economic advisor in the '19 presidential campaign.  She argues the government can create all the money it wants.

Sometimes I think Dr. Kelton really came up with a good scam.  There must be books out there, public appearances for her and the other MMT acolytes so they can rack in the wheelbarrows full of money from the Democrat apparatchiks and do something with it before it becomes worthless.  Down through history, there has always been profit in telling the king he can do whatever he wants; Dr. Kelton is simply this year’s royal advisor.  Does she really believe it or is she simply telling people what they want to hear?  I have no way of knowing.

The answer to Rep Yarmoth, as many people have said, is why do you tax us, then?  If you can create the money to do anything you want, then deficits don't matter, so why collect taxes?  Why not just make up every penny you spend rather than just what the unbelievers call the "deficit spending"?  Saying you need to collect some tax but can create the rest out of thin air implies you don’t really believe “The federal government can afford anything that it feels it needs to do.”   You're not a True Believer in MMT, you're a heretic.

Maybe there's hope for you.