Toward the end of writing last night's post, SpaceX did a second test fire of Starship S20, marking the first time for multiple static fires on one vehicle in one day since SN9 back at the end of January.

SpaceX Tweeted on their official account that this was the first firing of a Raptor vacuum engine integrated onto a Starship, and posted a nice video loop.  This is a screen cap from it in full screen mode. 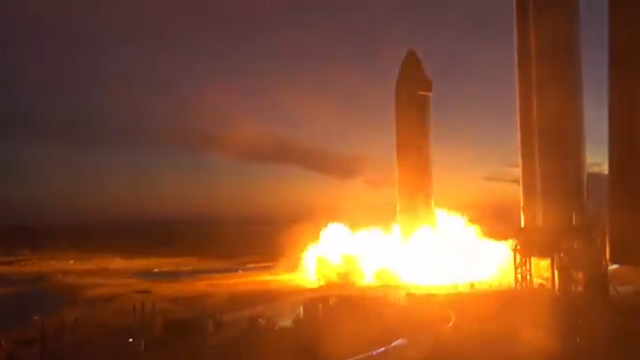 While previous static fires seemed to last three to four seconds, this one lasted closer to six or seven.  This static fire was the Raptor vacuum version, but the second static firing was more interesting; it tested both sea level and vacuum engines at the same time.

Finally, after perhaps the windiest road yet for a Starship from cryoproof to static fire, Starship S20 sailed through a static fire test flow on October 21st and ultimately fired up for the first time ever at 7:16 pm CDT (00:16 UTC). In perfect opposition to weeks of unprecedentedly slow testing, Starship S20 not only completed its first true static fire early in the test window, but it completed the first on-vehicle static fire of a Raptor Vacuum engine and then, just over an hour later, performed a second static fire – this time simultaneously igniting both a Raptor Vacuum and Raptor Center (sea-level-optimized) engine. Aside from also marking the first time that two Raptor variants have been simultaneously fired on the same vehicle, Starship S20’s two-test surprise was technically the fastest back-to-back static fire SpaceX has ever completed, beating Starship SN9 by about 15 minutes.

Back in January, SN9 completed three static fires; the three were at 12:28, 2:23 and 3:37 PM, according to my notes.  First to second firing was five minutes short of two hours, or 115 minutes.  The second to third was much faster, 1 hour 14 minutes or 74 minutes, setting an impressive company turnaround record. Starship S20, however, achieved two static fires in 62 minutes yesterday, October 21st.

Completing the two firings in 62 minutes versus 74 probably doesn't mean much, but Musk's vision for Starship is unlike any other rocket ever.  He views it more as an extremely high powered commercial jet.  Maybe even an ultra fast, ultra long range car.  When you get off your jet at Atlanta Hartsfield or someplace similar it's probably going to be taking off again in a time similar to 62 to 74 minutes (60 to 90 or 120).

For your amusement, Lab Padre put up a video of both static firings with views from several cameras.