It was rumor yesterday when Ars Technica's space reporter Eric Berger said his sources were telling him the agency was probably going to move crews, who had been dedicated to studying Starliner and working with Boeing, over to SpaceX's Crew Dragon capsule.

NASA will not make an official announcement for weeks or months, but two sources say the space agency is moving several astronauts from Boeing's Starliner spacecraft onto SpaceX's Crew Dragon vehicle for upcoming missions to the International Space Station.
...
The most likely scenario is that Nicole Mann, Josh Cassada, and Jeanette Epps will now fly on the SpaceX Crew-5 mission, targeted for launch no earlier than August 2022 on a Falcon 9 rocket. They are likely to be joined by an international partner astronaut, probably Japan's Koichi Wakata, for the mission.

From what I'm able to glean from what was published as rumors, Mann, Cassada and Epps worked as liaisons to Boeing much like Bob Behnken and Doug Hurley worked on Crew Dragon for a couple of years before their historic flight on the flight called Demo2 in May of '20.  Eric Berger notes that Mann has been assigned to the Crew Flight Test for Starliner since August 2018.

What was rumor yesterday was confirmed by NASA today.

NASA has reassigned astronauts Nicole Mann and Josh Cassada to the agency’s SpaceX Crew-5 mission to the International Space Station as part of the Commercial Crew Program.

Mann and Cassada will serve as spacecraft commander and pilot, respectively, for the Crew-5 mission. Additional crew members will be announced later.

Crew-5 is expected to launch no earlier than fall 2022 on a Falcon 9 rocket from Launch Complex 39A at NASA’s Kennedy Space Center in Florida. The duo and their crewmates will join an expedition crew aboard station for a long duration stay to conduct science activities for the benefit of humanity and exploration. 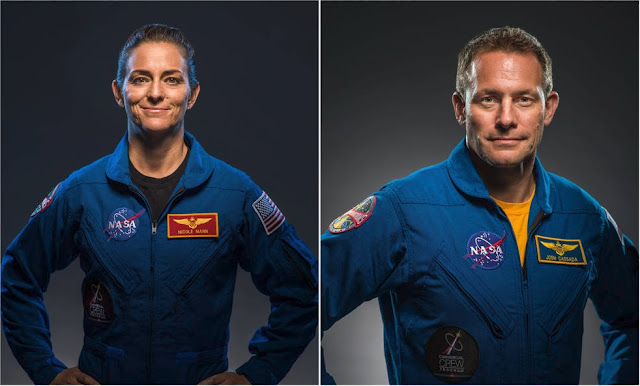 My first reaction to the announcement was to wonder if this was NASA quietly throwing Starliner out, but I don't quite get to that level.  Boeing, after all is under contract to deliver launch services although they're paying for this repeat of their awful test flight out of their own corporate pockets.  Plus, NASA and the Commercial Crew program have always said they want more than one contractor to fly.

Instead, it appears that NASA wants to get these rookie astronauts their first chance to fly.  Back to Eric Berger at Ars:

At the time of her assignment in 2018, Mann's flight was targeted to occur as early as 2019. Since then, however, the Starliner program has suffered a series of setbacks. An initial uncrewed test flight, OFT-1, finally got off the ground in December 2019. However, due to software errors, this vehicle was nearly lost, both shortly after launch and then shortly before reentry into Earth's atmosphere. Because of the vehicle's problems in flight, NASA did not clear Starliner to attempt to dock at the International Space Station, a key objective for the test flight.

The only thing that Eric's sources got wrong was the reference to Jeanette Epps.  She isn't mentioned in that press release from NASA.  That's not to say there isn't something else to get her a first flight sooner than waiting for Starliner to be announced in the future or that there won't be a similar press release within the next week or two.