The Major Buildout At Boca Chica is Wrapping Up

It seems like the build out at Boca Chica has been consuming virtually all of the time being spent on Starship Development for the last couple of months.  In the last week, since about Oct 14, virtually all of the major parts have been put into place, culminating today in putting the full Mechazilla Chopsticks onto the Orbital Launch Integration Tower or OLIT.  A few days ago, the last tank and tank insulating cover for the cryogenic fuel farm were transported to the Launch Complex.  This picture captures the major changes, although due to the distance of the camera and focal length chosen, they might not be immediately obvious. 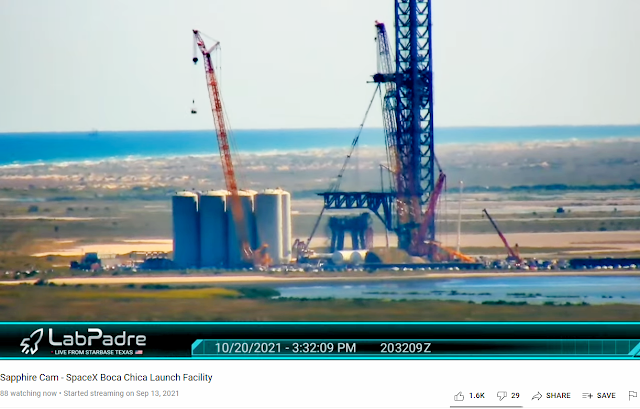 The eight large tanks for liquid oxygen and methane are just to the left of the launch pad and behind the yellow crane.  A few days ago, one of those tanks was gleaming stainless until the last insulating cryoshell (white insulating cover) was transported to the Launch Complex and lifted into place over the stainless steel tank.  There was a large horizontal tank taken to the pad complex at the same time as that last insulator which was said to be a liquid methane tank.  I don't see it in this view.

Right above the launch pad, the Chopsticks are being put into place today.  Early this morning, they were still on the assembly fixture.  A few hours later they were in virtually the same place they are in these pictures from this afternoon as the work of attaching them goes on (and they appear to be in the same place at the time of this writing, four hours after this photo). 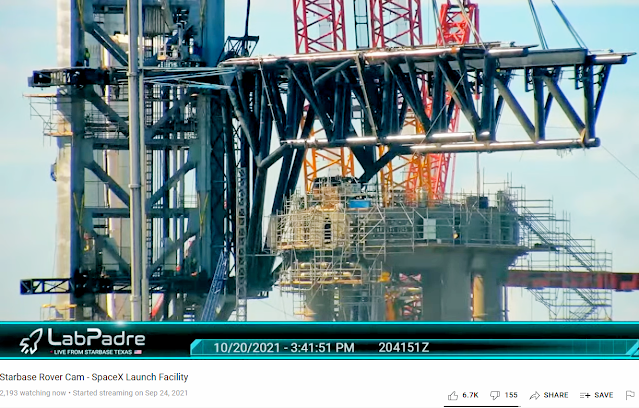 The Chopsticks are integrated with the OLIT and will go up and down depending on the task they're doing.  They can lift Starship onto the top of a booster, or will eventually catch the returning boosters and lower it onto the launch pad.

Meanwhile, Starship S20 underwent some sort of test Monday night/Tuesday morning.  It was either an irregular static firing or a preburner test.  Probably the latter.  Why the question?  In the early days of Starship testing, they did preburner tests regularly, but as the sea-level optimized Raptor Boost engines matured, that part of the testing was done less often.  S20, however, has the first Raptor Vacuum engines (RVac) to be installed on a Starship and it wouldn't be out of the question for them to go back to the preburner testing for a little while.  In that case, a full static fire is still probably necessary.

Whatever it was, it didn't look at all like the previous static fires I've seen.  Lab Padre has a short video with a few views of the test.