Meanwhile at Boca Chica - Someone is Playing Chopsticks

Well, someone is playing with chopsticks.  That's the term for the massive steel arms that are supposed to catch the Super Heavy booster out of the air at the launch site.  Instead of having it land on a barge at sea or landing pad near the launch pad, which is apparently too easy now.  Yesterday and today have marked the slow motion movement of the first of the chopsticks onto what appears to be a fixture that will be used to assemble the pair before they're mounted on the Orbital Launch Integration Tower.

These things have an odd shape and I don't know what they're going to look like in use.  This is a screen capture from very late in this NASA Spaceflight.com video that shows it horizontally oriented, suspended in the air by the big crane. 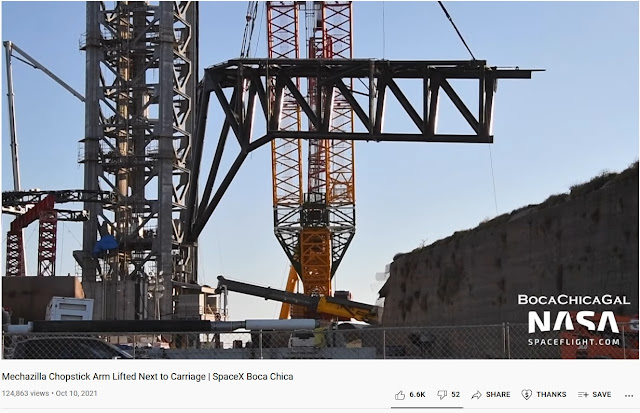 Yes, it's rather asymmetrical with that big section on the left end that extends vertically downward to large piece that looks like a pipe flange.  I watched that around some other things I was doing yesterday and they had some problems getting the cables to the crane over the chopstick's center of gravity.  Eventually, it was positioned near that red structure along the left edge of this picture.  There's a rendering of that on Twitter if you want a better look.

While it isn't as glamorous as watching the actual launches, this is extremely important work going on at Boca Chica Starbase.  Teslarati's Eric Ralph has a summary posted today.

SpaceX has begun preparing its Starbase ‘launch tower’ for the installation of a pair of giant arms designed to lift, stack, and even catch Starships and Super Heavy boosters out of mid-air.

Deemed ‘Mechazilla’ by CEO Elon Musk, assembly of first of the structure’s three main arms only began in earnest in June 2021. That ‘quick disconnect’ (QD) arm – designed to fuel Starship and stabilize Super Heavy during Starship stacking – was installed on August 29th and followed by the addition of a claw-like appendage meant to grab onto boosters about a month later. Now, all that’s missing from Mechazilla’s first arm is the actual ‘quick-disconnect’ device that will connect to Starship’s umbilical panel to supply propellant, power, and communications links.

However, ever since Musk first hinted at the possibility of catching Super Heavy and Starship, the star of the Mechazilla show has always been its ‘chopsticks’ – SpaceX’s internal colloquialism for the pair of giant, moving arms meant to lift and catch rockets.

Super Heavy boosters are enormous: 225 feet tall and 29.5 feet in diameter.  The thought of its landing system knowing its position accurately and precisely enough to catch the booster without flying it into one of the chopsticks is a bit mind-bending.  Then there's thinking of the load those arms will have to bear to catch the booster, yet be delicate enough to not crush it.

During the two hour and 20 minute walk around of Starbase with Elon Musk that Everyday Astronaut conducted, Elon said something that stuck in my mind like a sand spur in a wool sock.  He said when the Super Heavy returns to the launch tower to be caught in the air, its density (pounds per cubic inch) is close to that of an empty beer can.  A very, very big beer can. Beer cans can be crushed in your hand.  How rugged are they if you scale the beer can up to 225 feet by 30 feet diameter?