No, It Doesn't Appear That SpaceX's First Orbital Flight Has Slipped to March

A buzz has been going on in active space and SpaceX watcher communities that a NASA document shows that SpaceX's "first orbital flight" has slipped to late March.  It apparently started on Reddit's /r/SpaceXLounge and then was picked up by Teslarati's Eric Ralph.  As of late today, Reddit's readers and Eric Ralph both seem to have converged on the actual message; saying that not necessarily the first orbital flight, but that an orbital flight will be in used in March '22 for a project NASA is working on.

The story focuses on a program NASA is going to do the monitor the surface tile temperatures of the Starship during reentry.  The whole story focuses around these two graphics, which appear to be the kind of slides that get presented during a design review, from a program called the NASA Scientifically Calibrated In Flight Imagery or SCIFLI.  Click em to embiggen em, as usual. 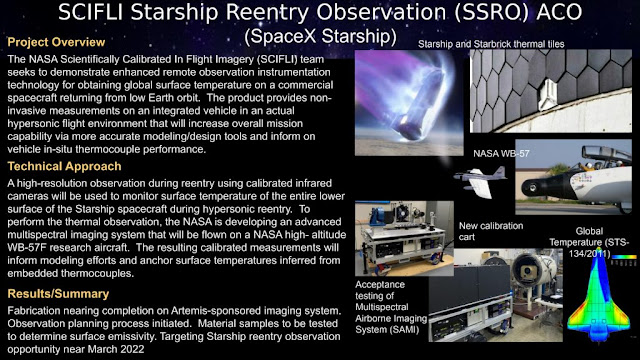 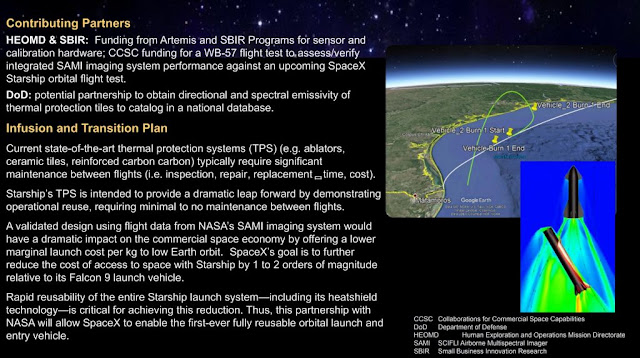 As you can see, the plan is to use a set of infrared imaging cameras that they're currently developing to monitor the "entire lower surface of the Starship spacecraft during hypersonic reentry."  The cameras will be flown on a NASA WB-57F research aircraft which will have to be tracking the vehicle from a high altitude in a parallel course.  The very last sentence on the top graphic says, "Targeting Starship reentry observation opportunity near March 2022."  That clearly doesn't say "Targeting the first Starship reentry ..." and if anything, it can be read as the March suggestion saying that's the target date for their equipment to be ready.

If you'll pardon the expression, the exact date of the first orbital flight is still up in the air.  The FAA has yet to announce either an approval for them to continue or a disapproval.  SpaceX has needed to put a lot of effort into completing the ground infrastructure for Starship/Super Heavy operations, or "Stage Zero" as Elon Musk refers to it.  As we've talked about many times, in the last several months there has been a constant effort to move every little bit of infrastructure possible from the vehicles to the ground.  This time hasn't been wasted, although we all would like to see them trying to fly these ships.

As launch facility work has been going on, they continue to produce more Starships and more boosters.  Currently at the launch facility they have Starship S20 and booster B4.  Booster B5 and S21 are said to be nearly ready.  It's conceivable that B4/S20 might do some testing before attempting a true orbital flight.  Since everything published so far on them says both will end up being tossed into the Gulf of Mexico (B4) or the Pacific near Hawaii (S20), it might well be that B5/S21 will attempt the first orbital flight.

The sooner any of this kicks off, the better.  Oh, and if you want to see a cool video that just might show what a Starship reentry would look like, check out this one.