By now, I'm sure everyone has heard the story about the way to fund the growing federal debt.  Some one said simply mint a coin in platinum and declare it to be worth $1 Trillion dollars, then deposit the coin with the Federal Reserve.  Then the Fed could add the stated value of the coin to their balance sheet and buy the trillion dollars worth of bonds.  Since a trillion is nothing in the face of the current debt levels, they'll have to mint a lot of them.  The recognized national debt is closing in on $29 trillion with other payments due in the future (most places call those unfunded liabilities) of nearly $158 trillion.  They'd have to mint 187 of them.

Since there's nothing backing it and nothing to distinguish the value other than "the coin is worth what we say it's worth," I suggest they go buy some silver dollars, some paint, and create something like this. 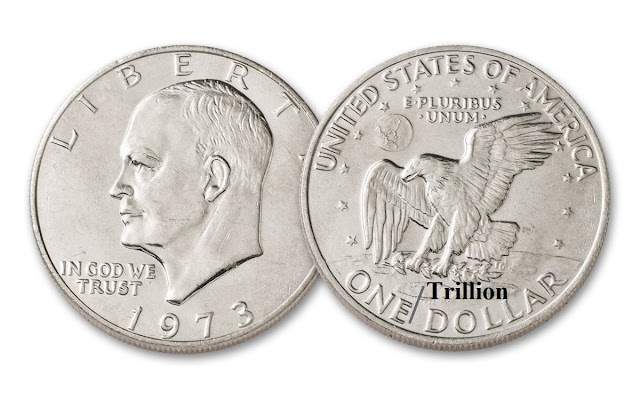 Maybe get some first graders to do the lettering.  Give it more personality than my edit in "Paint".  And add that pesky "s" that needs to go on the end of "dollar."

Saying the coin is worth a trillion dollars is the essence of Modern Monetary Theory.  The fact that someone would seriously consider minting such a coin shows economic ignorance of epic levels, but the whole country is running on MMT now, which is nothing but ignorance of economic history.  Nobody stops to think how other countries would react to us doing that, and how it would affect their confidence in our bonds or anything else.  (Much like their confidence in our leadership after Afghanistan).  Nobody stops to ask the question that if we can create trillions like that, why do we tax anybody in the country anyway.  It's a nonstop train to no longer being the world's reserve currency. Honestly, though, that train left the station long ago and the death of the dollar in that role is a matter of when, not if.  I wouldn't be surprised to see it happen almost any day, now.

It's kind of fun in a macabre sort of way to watch MMT failing all around them yet they seem incapable of seeing that's why things are falling apart now.  A common failing in all sorts of endeavors is to be so in love with your theories that you can't see that other ideas might work better.

Treasury Secretary and long term Deep State Hack Janet Yellen is still saying the inflation is only transitory, and oh by the way, let's get rid of that pesky debt ceiling so we can just create and spend whatever we want whenever we want.  Money is just medium of exchange, right, peons?  What's that about store of value?  Don't be silly.  We want a constant 2% inflation so that the prices of everything will double at least twice in your wretched lives.  That's not storing value, it's planned destruction of value.

Even John Maynard Keynes didn't envision his Keynesian brand of economics creating money perpetually; he thought it would be done in times of crisis, and then stopped.  The excess dollars could be wrung out of circulation.