My last update on the 1 by 1 was September 12th, Sunday, the day before I tore the end off my right index finger.  Personally, I've always puzzled over why Friday the 13th is considered the bad luck day in a society that regularly does jokes about how badly Mondays suck while Fridays are the wonderful day.  Yeah, I know about the Friday the 13th superstition dating back to before the modern work week, but I figured by now somebody would propose Monday the 13th as being worse.  It will be for me.

I had the stitches taken out yesterday (10/1) and have been working toward setting up to resume work on the crankshaft since last week.  I'd say the finger looks butt ugly, but that's an insult to butts everywhere.  I've never seen a butt that ugly.  It's more numb than painful, and I'm re-learning to type on it as I type this up.

Last week, I mentioned trying to come up with a way to cut what I called the Terry Thomas cutter - one with a gap in the middle - by ordering a smaller carbide bit and using diamond files to cut the slot.  I found and ordered a couple of smaller bits.  Very fortuitously, I received an email out of the blue recommending a video by machinist Joe Pieczynski.  It's a 18 minute video, so only machinists need watch it, but he makes a cutting bit with a wider gap in the middle, not a slot but a rounded area.  Since I didn't think to ask for permission, I won't use the emailer's name, but if you're still reading, thanks again!  That video is how the cutter was born. 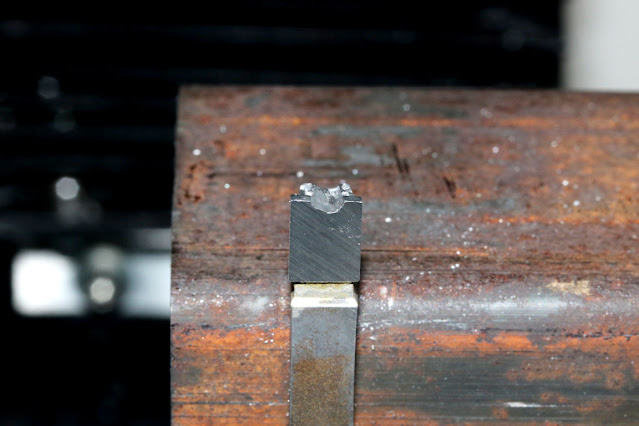 It looks a little raggedy-ass, but all that matters is the two cutting edges are smaller and I get the benefit of the Terry Thomas cutter.  The relieved area was made using a Dremel-type handheld grinder (actually a Foredom Flex Shaft cutter) and a diamond dentist's bit.

After this, I positioned it in a tool holder so that it was touching the metal at the same machine settings as the other tools I was going to use. 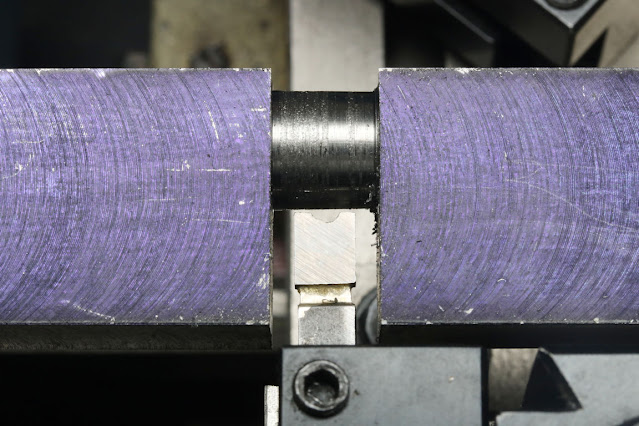 I used Joe Joe Pieczynski's method, using my parting tool to remove deep cuts in the stock, which leaves ribs between the channels the parting tool makes, and then use the cutter I modified to sweep back and forth reducing those to the desired constant diameter.  This screen capture from Joe's video shows what it looks like after using the parting tool. 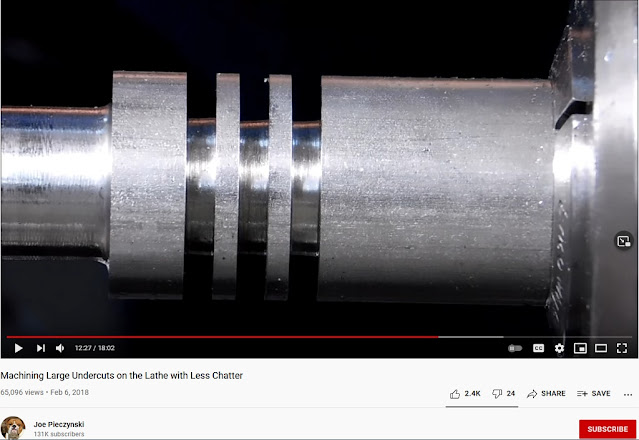 After the cleanup with the relieved cutter, all I needed to do was some final sizing on the length and  diameter of that round piece of the bar you see. 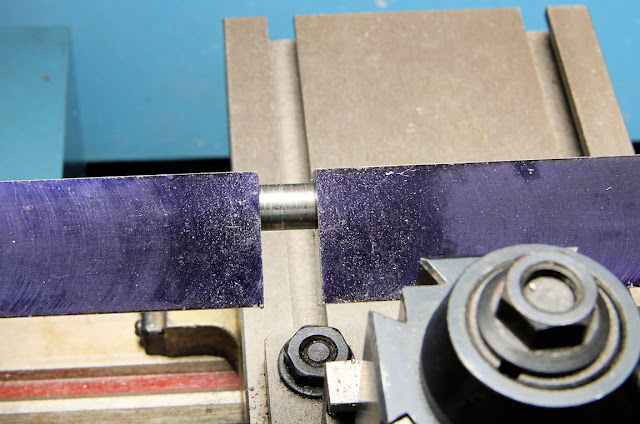 And after a two week interruption, this step is just about finished.  The width is right (0.438) but the diameter is about .002 over - intentionally.  I'll put down some paper under the part to catch any grit and run a strip of sand paper over that.  It should be "Done" done tomorrow.

Everything I've been doing so far is to make the bottom piece in this view of the crankshaft.  The next step is that most of the upper half of the rectangular bar (in the photo above) gets cut off.  That area that I've been working on  will end up 1.113" wide.  I'll use the bandsaw to cut away most of the bar. 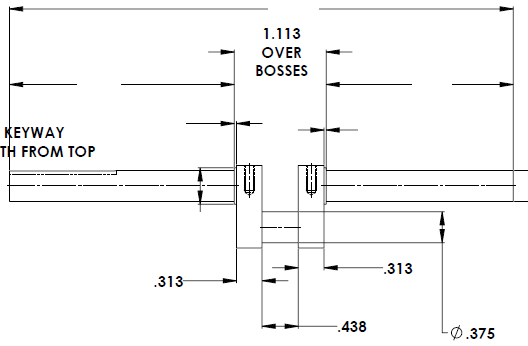