Americans Are Waking Up to the Deficit Time Bomb

This morning, Business Insider carried a summary of a Pew Research Center study which shows Americans are waking up to the financial disaster looming ahead.  In the last few years the percentage of people calling the budget deficit the biggest problem facing us has grown from 53% to 69%, a healthy increase.  Perhaps unsurprisingly, Republicans were much more concerned than Democrats, with 84% of Republicans saying this compared to 66% of Democrats - which is still a pretty healthy percentage.  Source data is here at the Pew Center.

Let me point out something a little subtle here.  Their table said 84% of R, 66% of D and 62% of Independents said the budget deficit is the largest problem facing us.  If there were equal numbers of the three views in their sample, the percentage "of Americans" quoted in the opening (69%) would be the mean of those or 70.6%.  The fact they say 69% indicates that their sample was weighted away from Republicans. The Pew center has a reputation for being a left-leaning organization and the selection of the sample group they chose, and the text of that article lead to that conclusion, too.

That aside, the problem is that there is no consensus on what to do about reducing the deficit, and neither side in Congress offers leadership.  The general public seems to say that they're concerned about it, but have no idea how big the deficit is and how dire the situation is. The Simpson-Bowles commission, which reported on the problem and potential fixes in 2010 is a good example.  The Pew center pollsters asked their sample group to react to proposals in the Simpson-Bowles report. 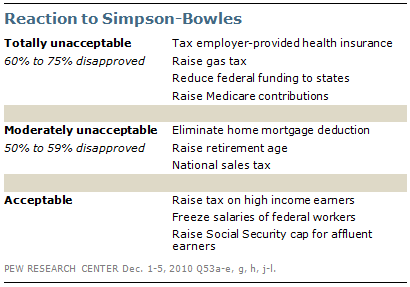 If we look at the acceptable to moderately unacceptable options, you can see a definite "let the other guy pay for it" outlook.  It was "totally unacceptable" to raise gas taxes and reduce federal funding to the states - things that everyone would pay for.  No, raise taxes on "high income earners"; raise Social Security contribution cap for "affluent earners", and create a national sales tax (rich people buy more, so they pay more).

Sorry, this isn't going to work.  You could take every penny from "the richest 1%" and not be able to run the US at current spending levels for a whole year - let alone continually increase spending as we've been doing.  We're all going to hurt.  We can't put this off on someone else - there will be pain for everyone.

Bill Whittle says it well in this video.  There will not be an American Economy in 15 years if the CBO is right.  It's not just that the Republicans won't be able to provide the awesome benefits you're expecting; nobody will.  There is literally not enough money in the world.

The discussion that must happen is how to stop us from following the Eurozone into the abyss.  Most importantly, it needs to be an honest discussion, as free of distractions ("eat the rich!") as it can be. The people may need to lead their leaders.  At least people are beginning to wake up to the problem.  Andrew Kohut, director of the Pew Center put it this way:


In my years of polling, there has never been an issue such as the deficit on which there has been such a consensus among the public about its importance – and such a lack of agreement about acceptable solutions.