What Happens When the Euro Collapses

Tyler Durden over at Zerohedge writes on The Consequences of the Unthinkable: Here's What Happens When the Euro Collapses


As the following image from Spiegel summarizes, three things will happen simultaneously when the unthinkable finally occurs: i) economic output plummets, ii) unemployment rate soars, and iii) consumer prices explode. Of course, this is nothing but merely deferred consequences for Europe partying for over a decade under an unsustainable regime that borrowed from the future (sound familiar?). And now the inevitable hangover. In other words: payback is a bitch. 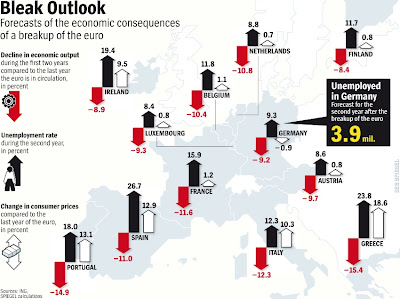 Feeling a bit more poetic than Spiegel magazine, I think it goes something like this:

from The Gods of the Copy Book Headings - Rudyard Kipling


As it will be in the future, it was at the birth of Man
There are only four things certain since Social Progress began.
That the Dog returns to his Vomit and the Sow returns to her Mire,
And the burnt Fool's bandaged finger goes wabbling back to the Fire;