A New Historic Low in Class

A couple of days ago, Miquel at Gun Free Zone pointed out the laughably crass Obama 2012 donation website, which says


Let your friends know how important this election is to you—register with Obama 2012, and ask for a donation in lieu of a gift. It’s a great way to support the President on your big day. Plus, it’s a gift that we can all appreciate—and goes a lot further than a gravy bowl.

As Dave Barry says, "I'm not making this up": 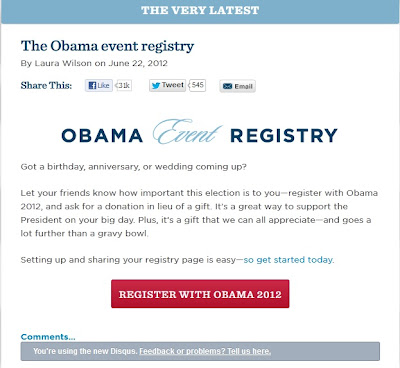 Still in the category of "I'm not making this up", the website hasn't scrubbed comments!  At least on a Sunday morning at 11:30, comments are strongly against the idea.  I grabbed these to show you: 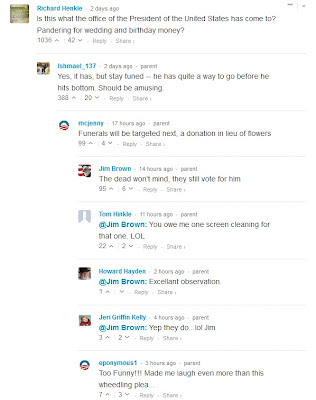 I find this fund-raising idea to be horribly crass, and I'd swear this was the Onion or Newsbusters or another parody website if I hadn't gone there myself.  Derek Hunter, columnist and snarkmeister at TownHall.com does a column on it appearing today that sums up a lot of it.


This tactlessness got me thinking – what other sorts of “asks” could the Obama 2012 team come up with?

“Do you have a terminal disease? That’s a tragedy, just as President Obama not winning a second term would be a tragedy. So as you get your affairs in order don’t forget to add the campaign to your last will and testament. Your family can have your furniture; we just want your cash. If you can survive long enough to sell the furniture, that’d be peachy. Cash is king, you know.

We've read this week that Mittens is out-raising Obama, and Obama is outspending his donations.  Despite the high-profile dinners like Sarah Jessica Parker and  Anna (the devil in "The Devil Wears Prada") Wintour, Bamster isn't raising the money.  Bankers gave him far more money in 2007 than McCain; this year they're giving their money to Mittens.  That can only mean the bankers are putting their money on the safest bet.  Obama has been a disappointment to them; one can only disguise the incompetence and dishonesty so long.

Mrs. Graybeard and I were talking about the essential difference between Jimmy Carter and Obama.  Carter apparently believed the crap he spread and walked the walk.  He wore the dopey sweater and kept the thermostat low; he put a solar panel on the White House, and didn't just give our money to a solar electric company. After he was booted out of office, he built the Habitat for Humanity houses.  Obama, on the other hand, is transparently lying: while he tells us about austerity and shared sacrifice, he and his wife live at extraordinary spend rates.  Who would have guessed?