Another Head Fake on QE3

This morning, the talking heads were confident that after the Fed's Open Market Committee meeting, a new round of QE would be announced.  Instead, what they did was extend their "Operation Twist" program.  Operation Twist swaps short term bonds for long term bonds, which they say is intended to keep long term bond rates low.  Wanting to keep long term bond rates low is simply to try and keep the market from "getting away from them".  You probably know that a major item in our budget is the interest on the bonds that must be paid.  Many people have pointed out that current interest rates are at historic lows (they are really negative when inflation from QE is figured in) but that if rates were near where they should be based on inflation and not the Fed controlling the rates, say around 8 or 10%, the US would collapse in no time.  This move is to kick that can farther down the road. 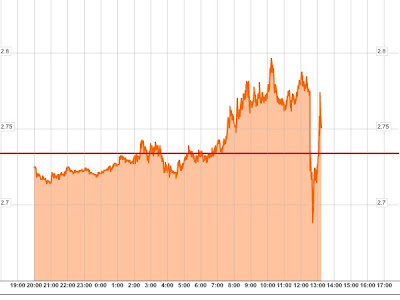 This is today's intra-day chart of yield on the 30 year bond (the "long bond"), you can see the rate dive low right after the announcement and then pop back up nearly where it was.  Joe Weisenthal at Business Insider thinks their approach is not going to work.


Now the incorrect thing you'll hear today is this: That because the Fed says it would buy more long-term Treasuries, and because in theory greater demand for Treasuries causes rates to fall, that the fall in rates is what the Fed was going for.

So the initial drop in rates reflects the market's view that the easing the Fed announced wasn't satisfactory and that the Fed wasn't going to do as much as expected.

More ominously, from my viewpoint, this says the Fed wants inflation.  They are doing all they can to create inflation and gets us out of this mess by creating money from thin air.  If you're retired and living on savings, or saving for retirement, they just put another one in your back.  Oh, yeah - I've been saying this for a couple of years.